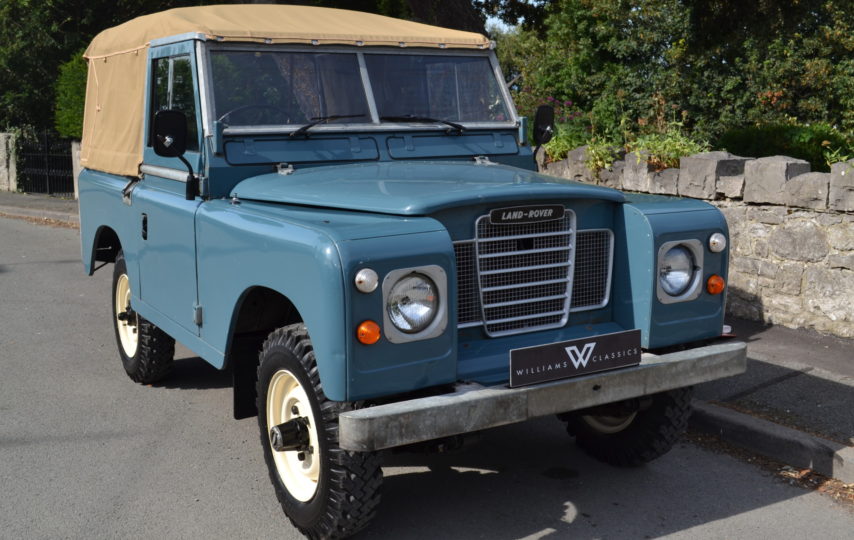 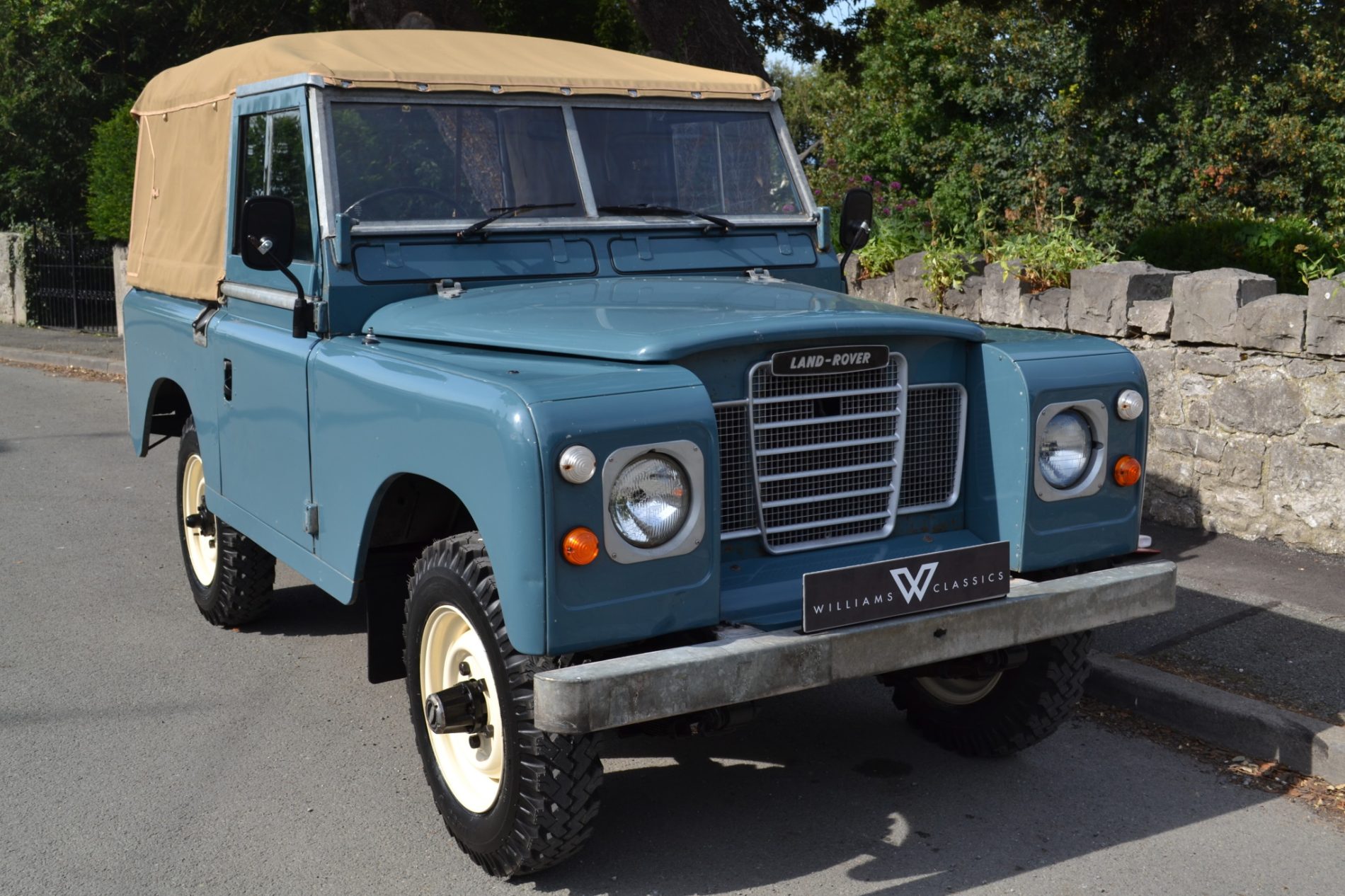 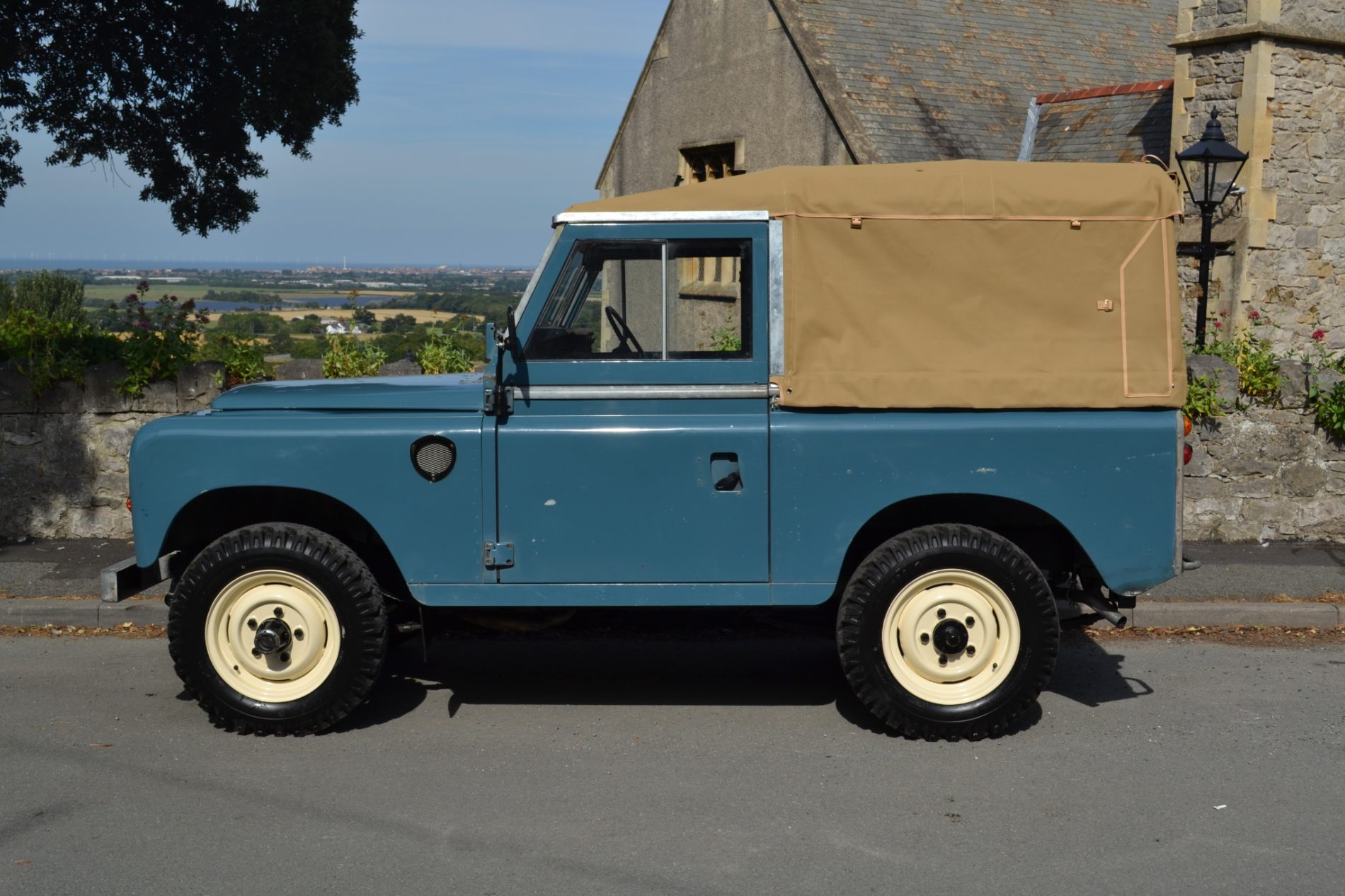 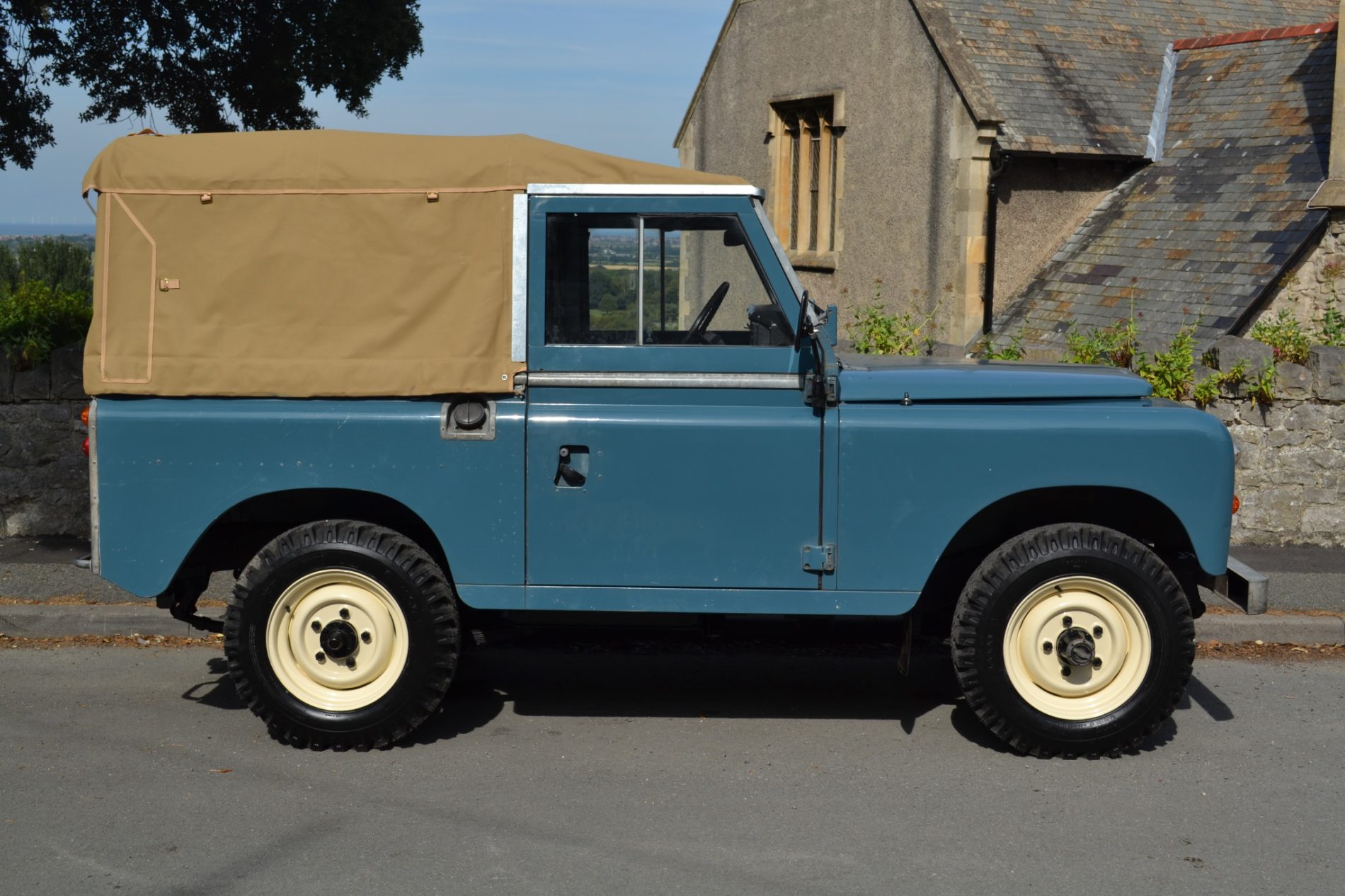 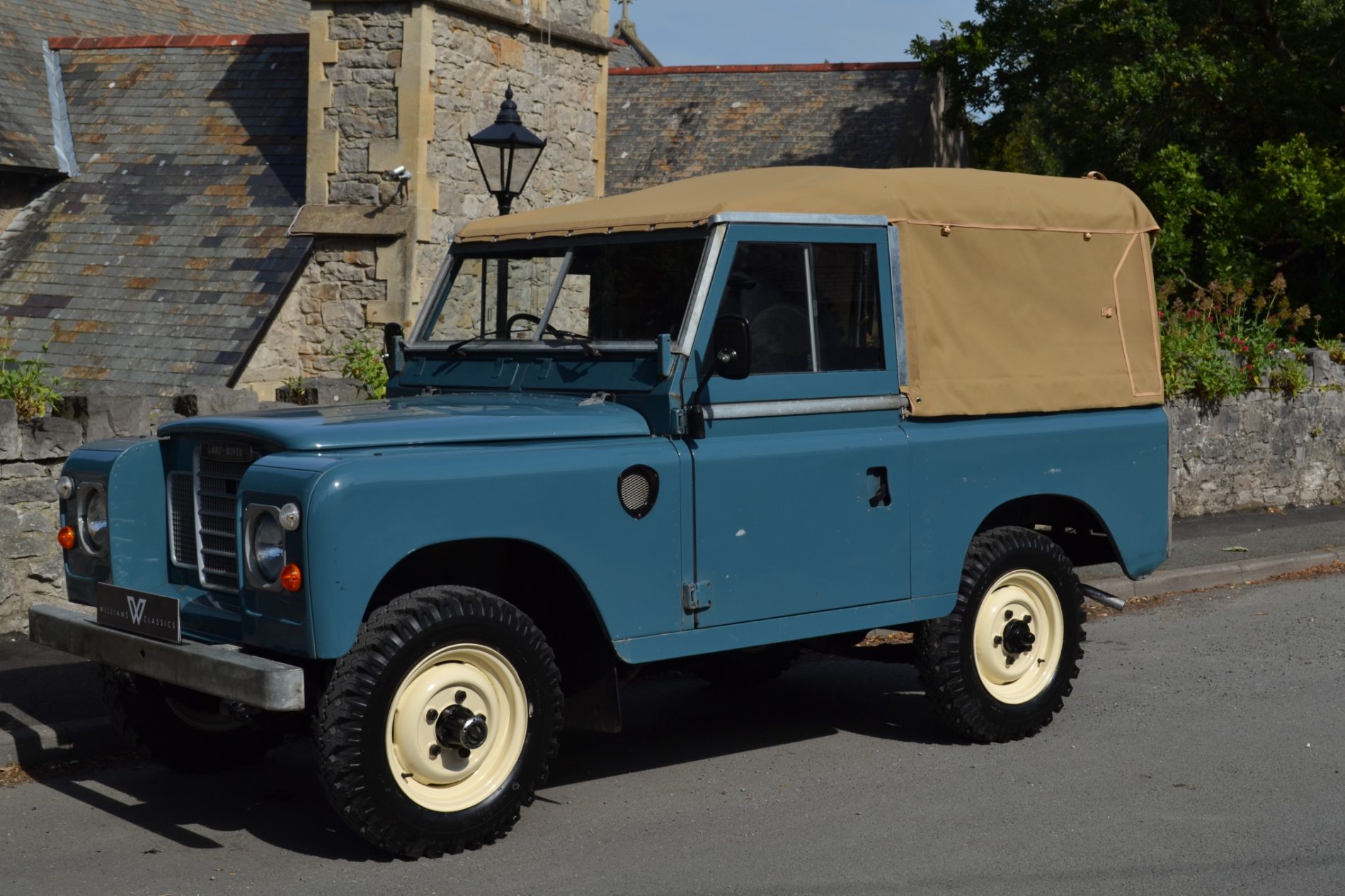 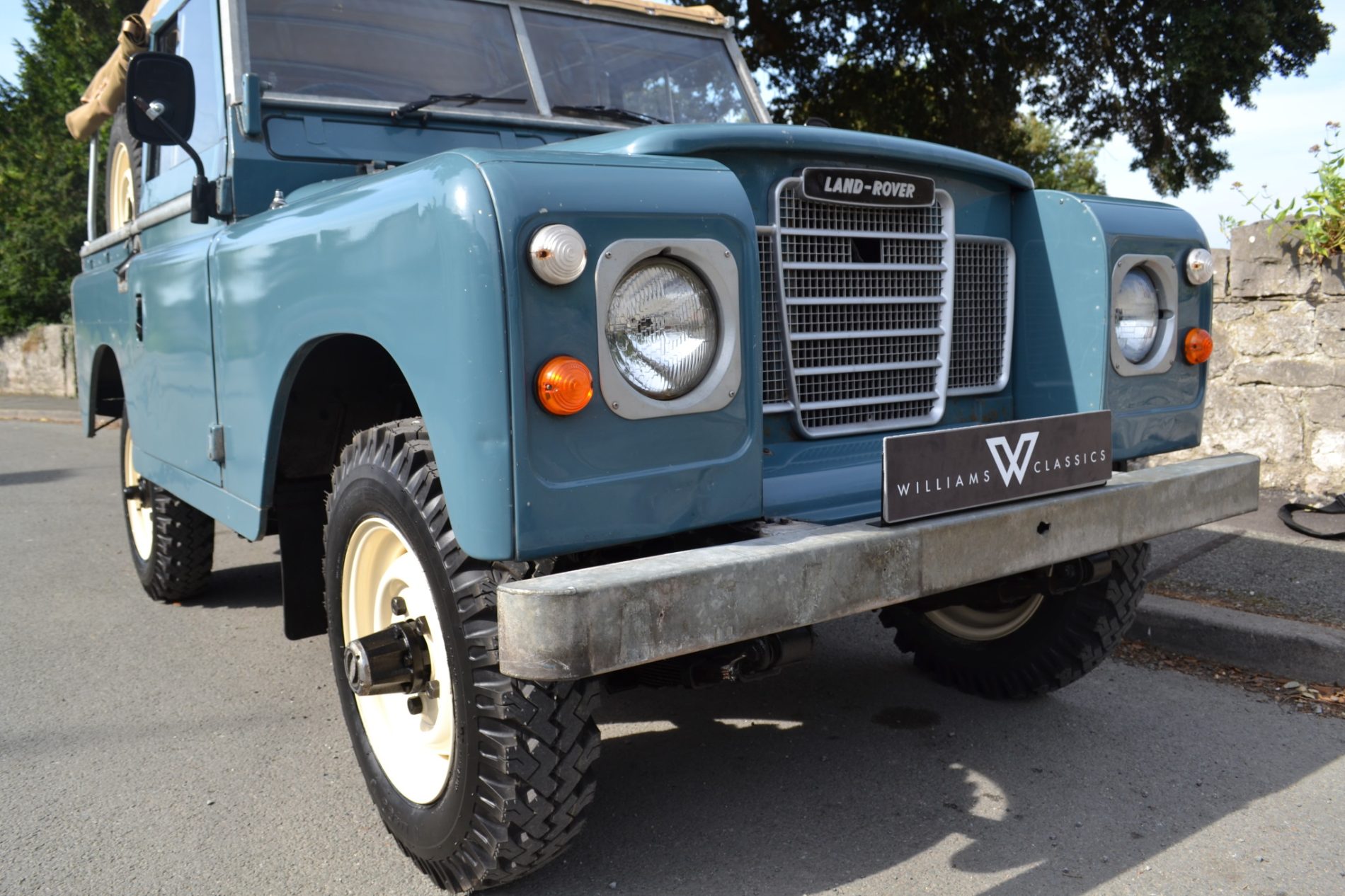 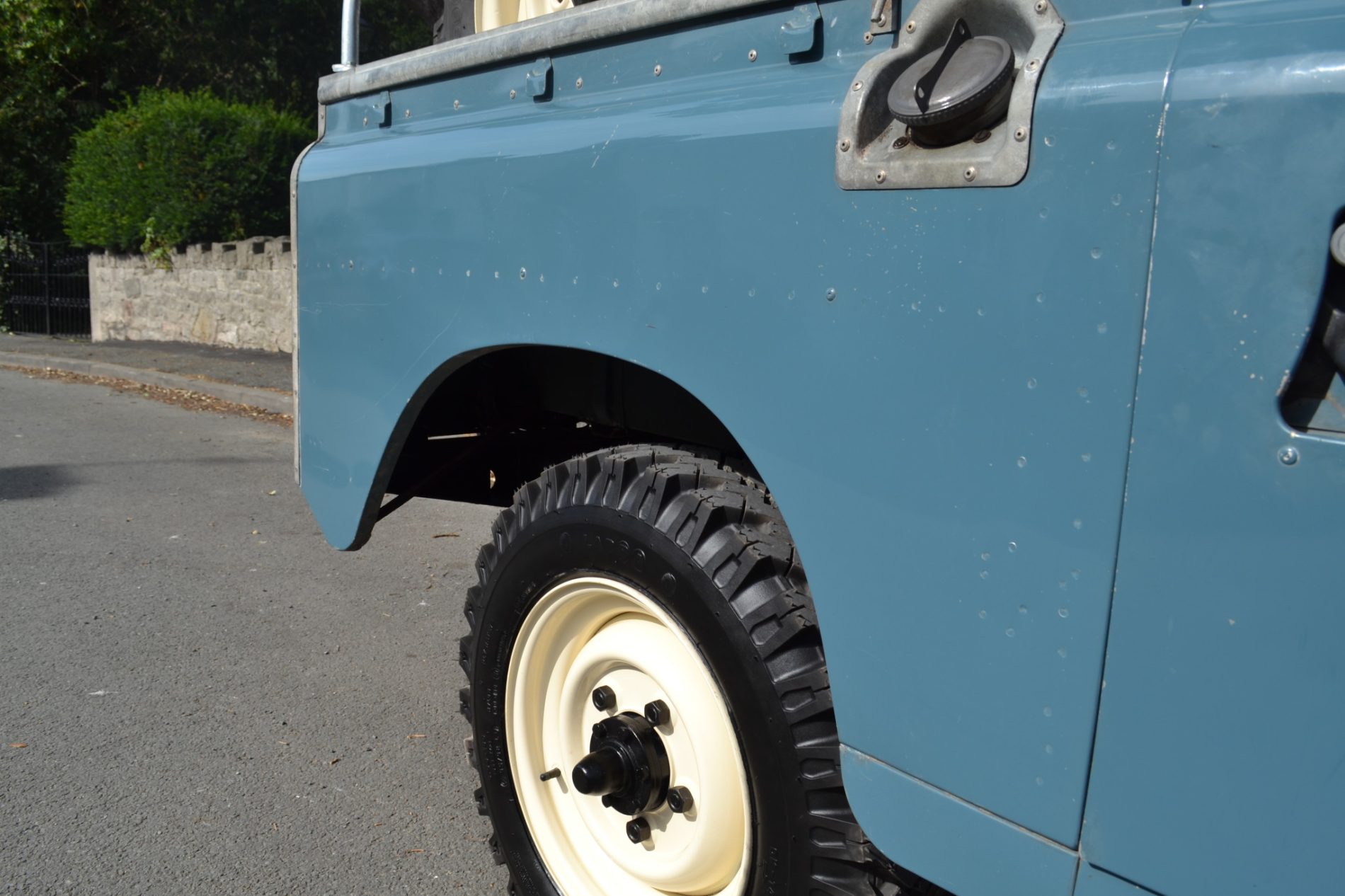 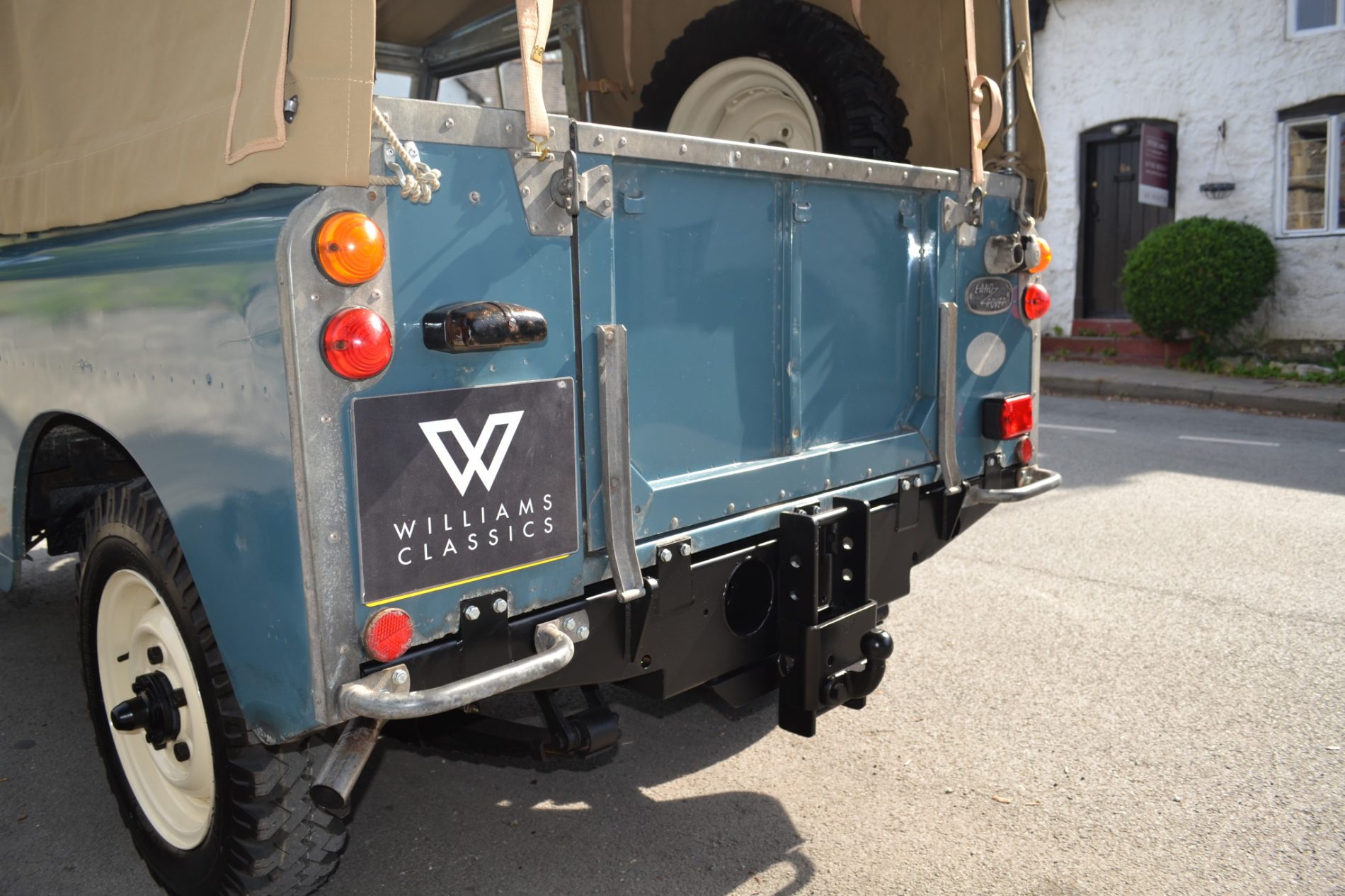 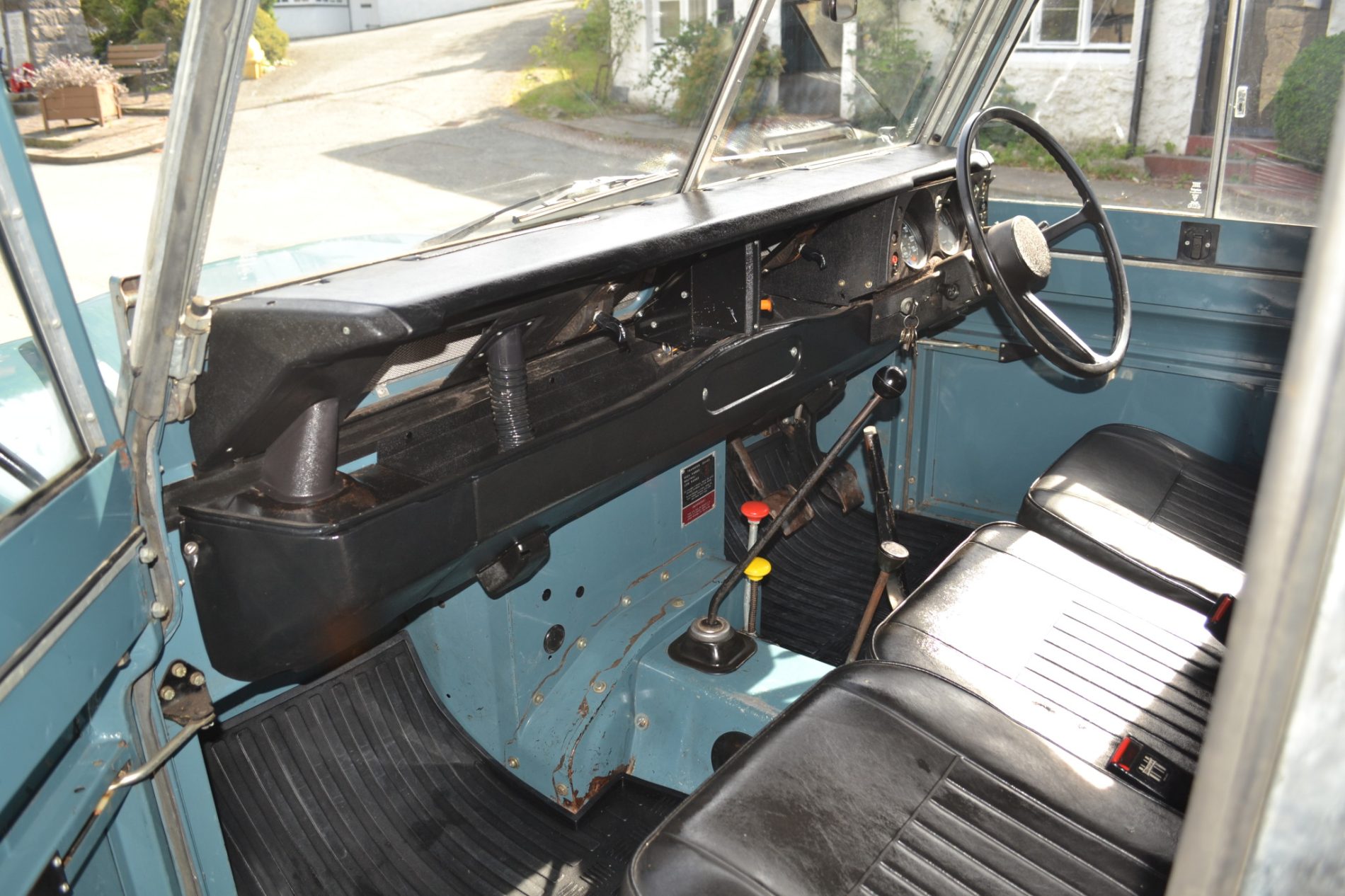 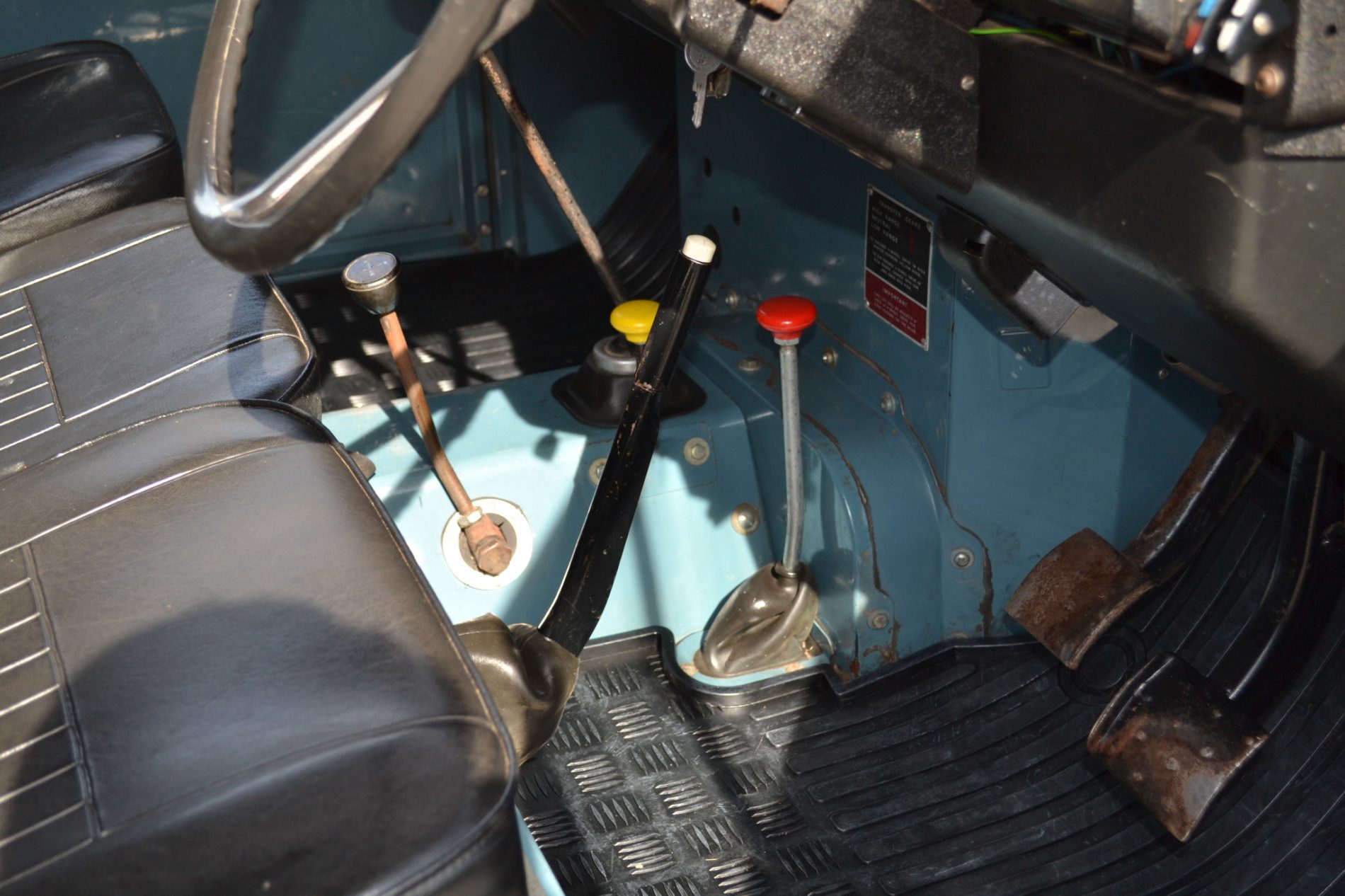 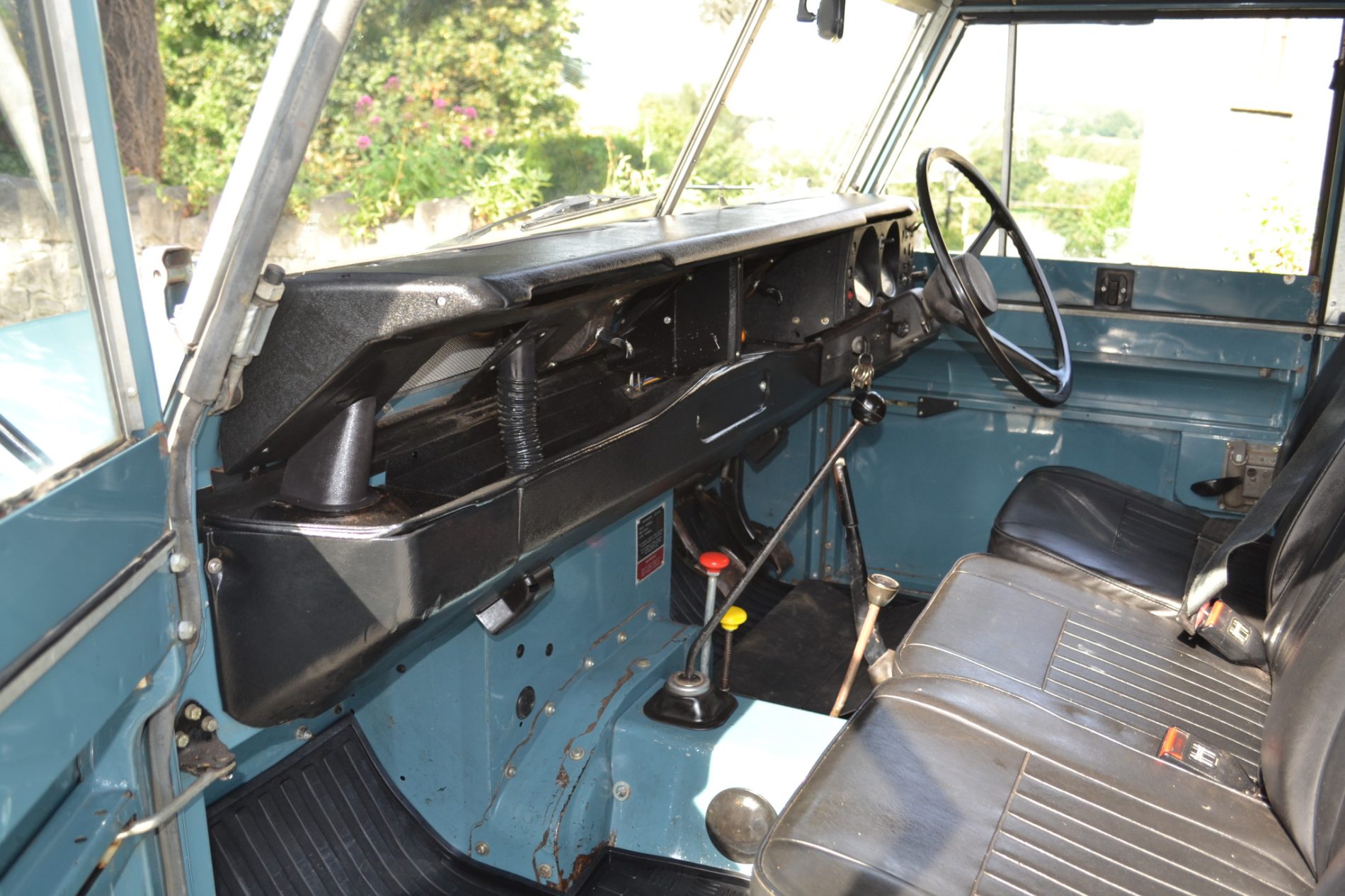 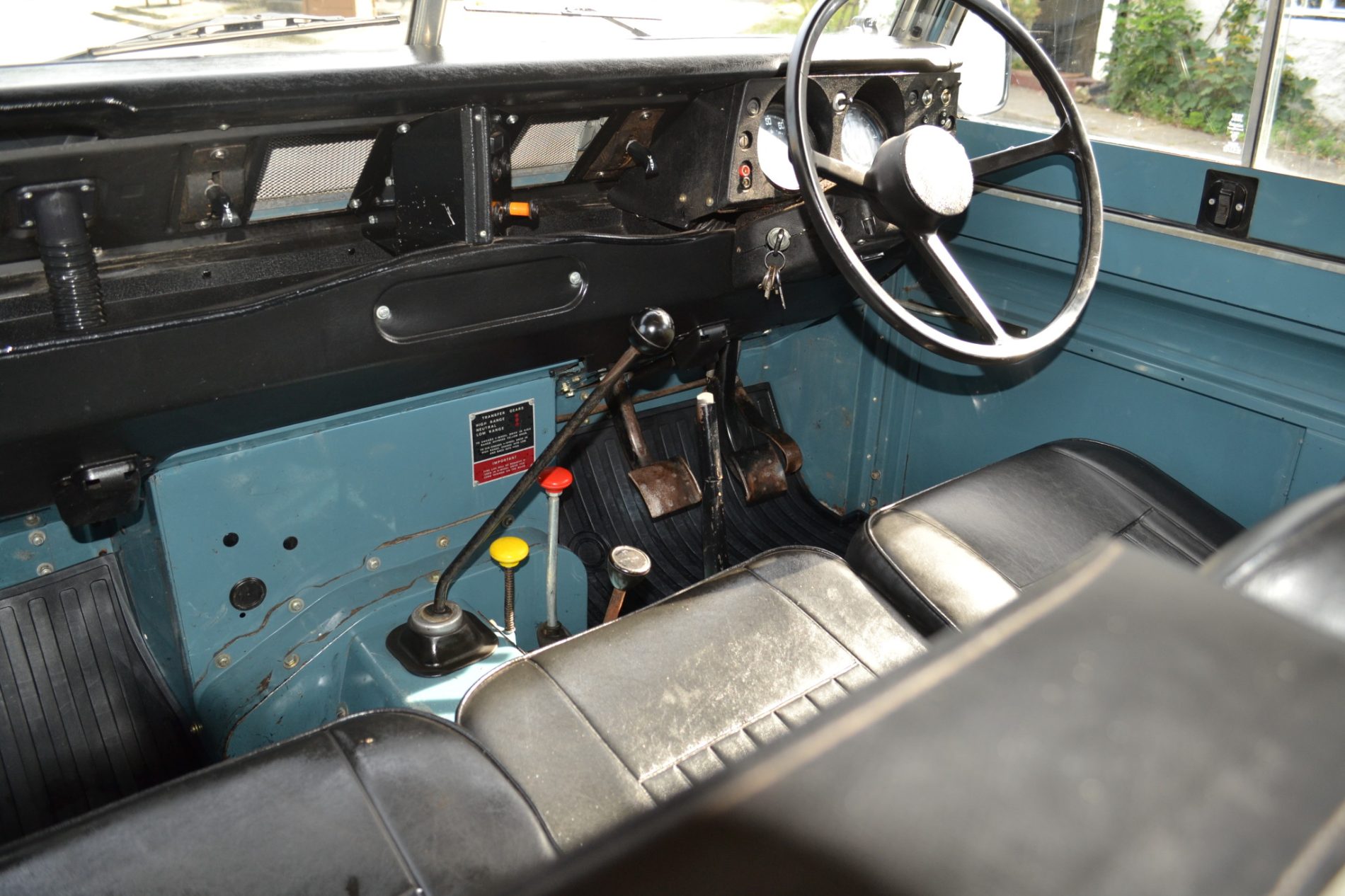 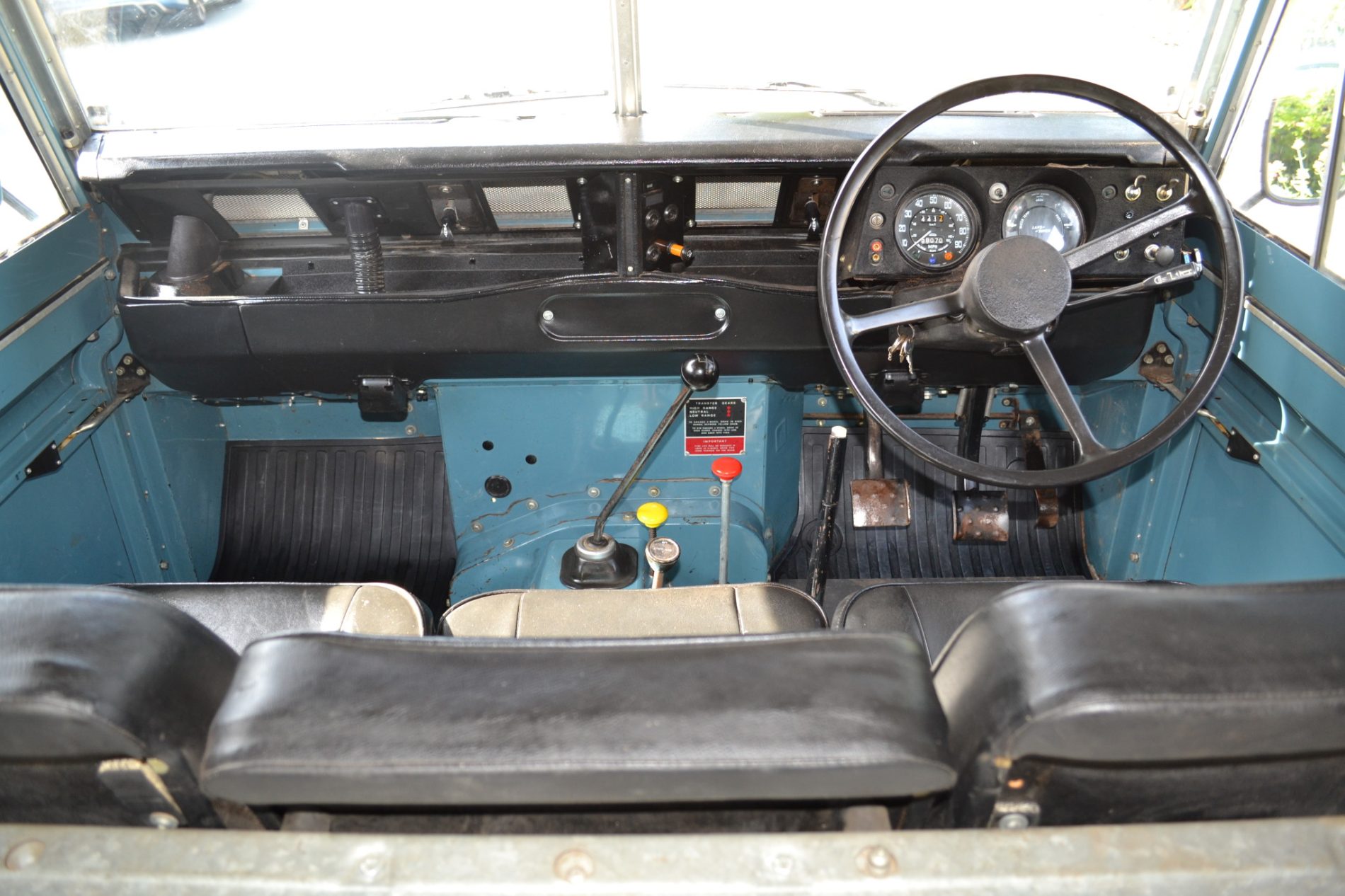 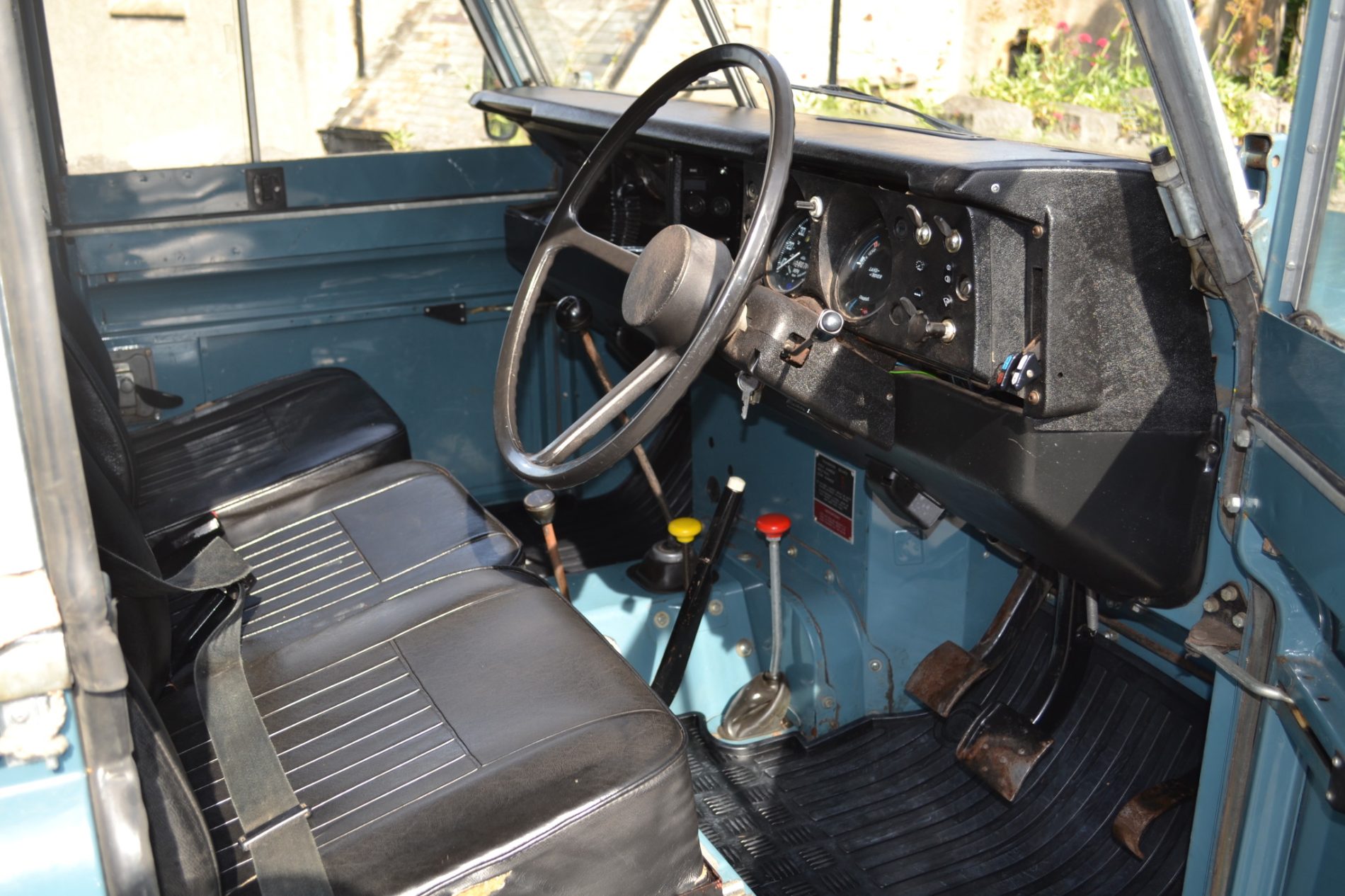 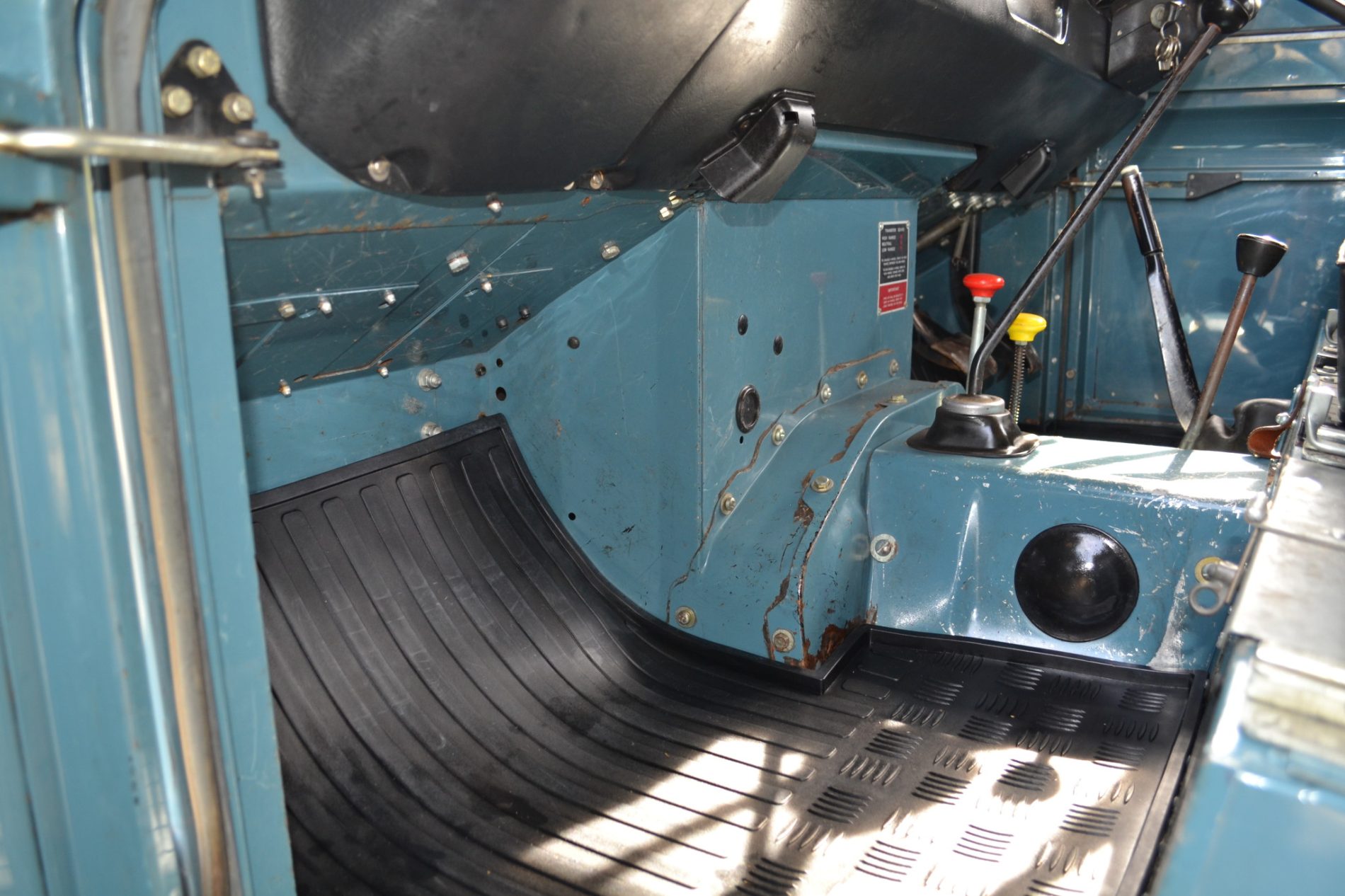 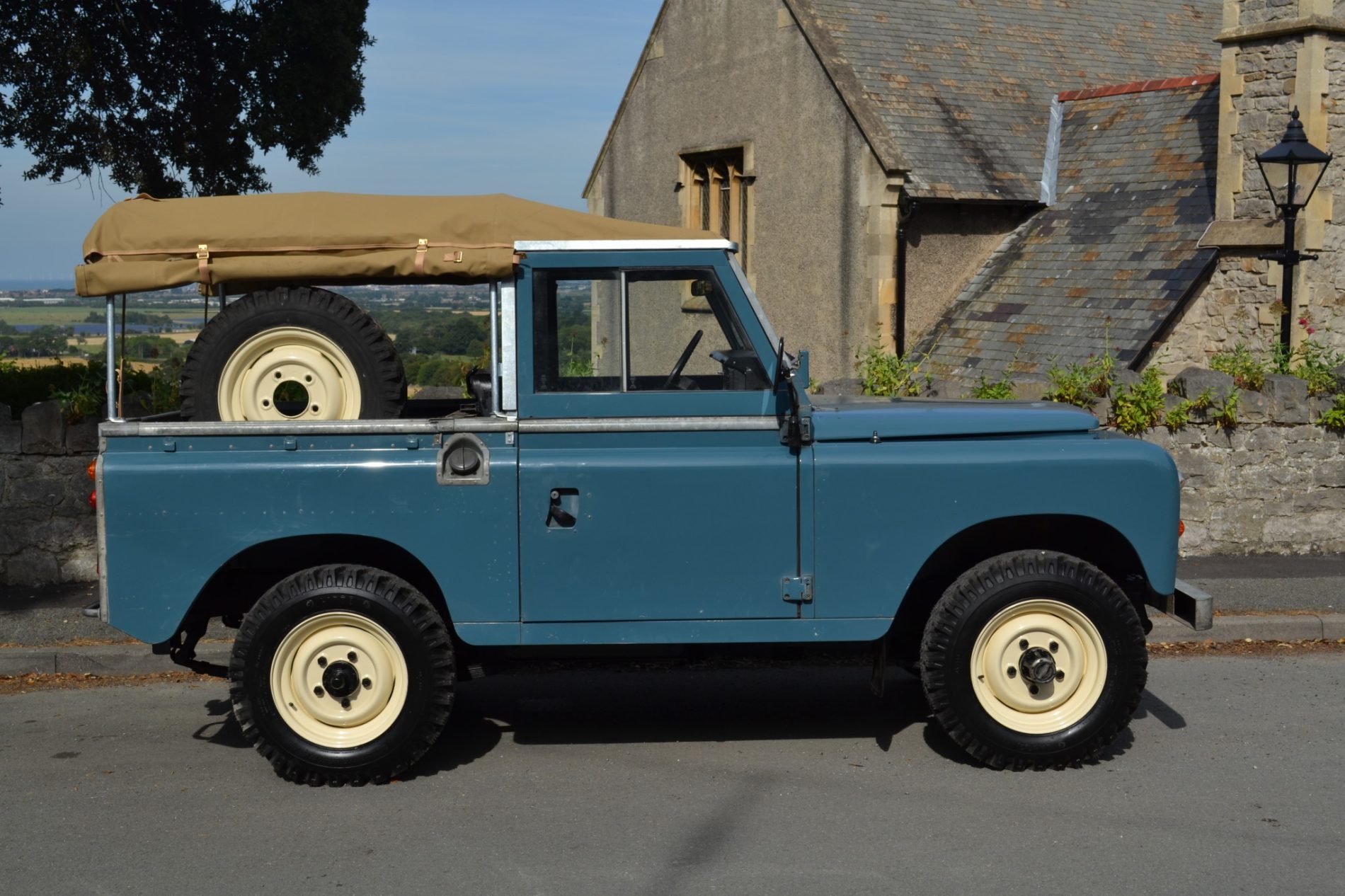 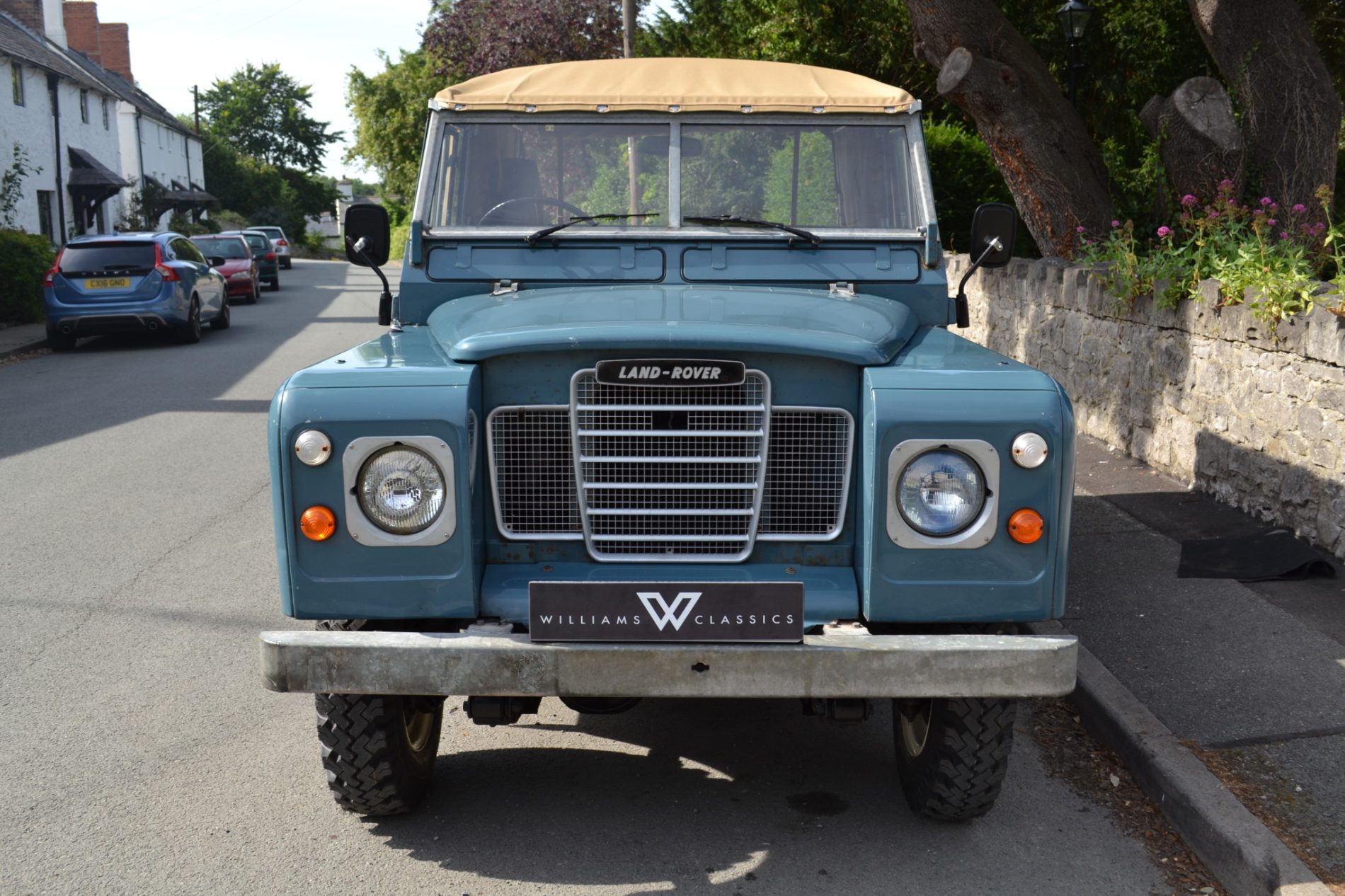 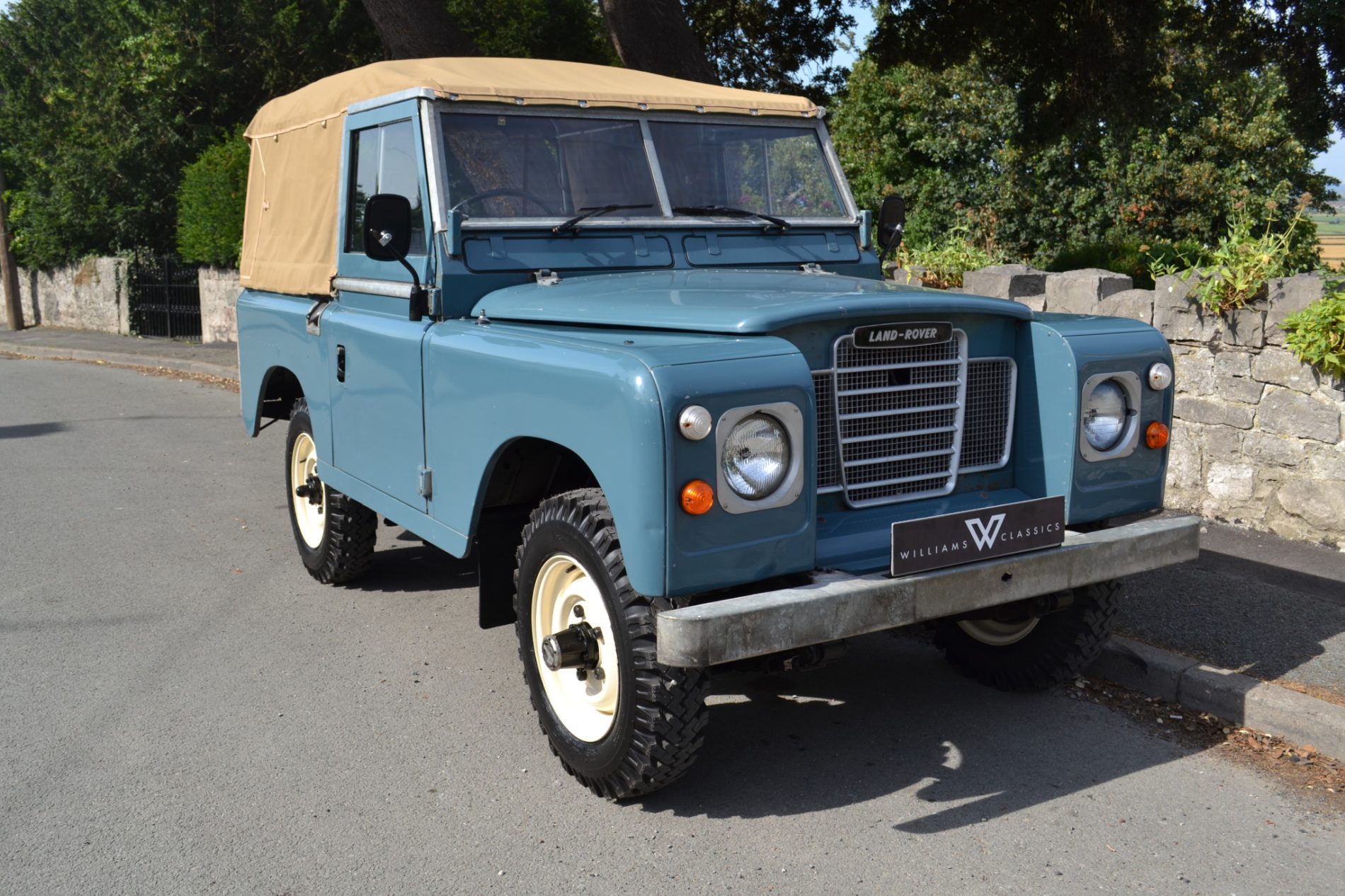 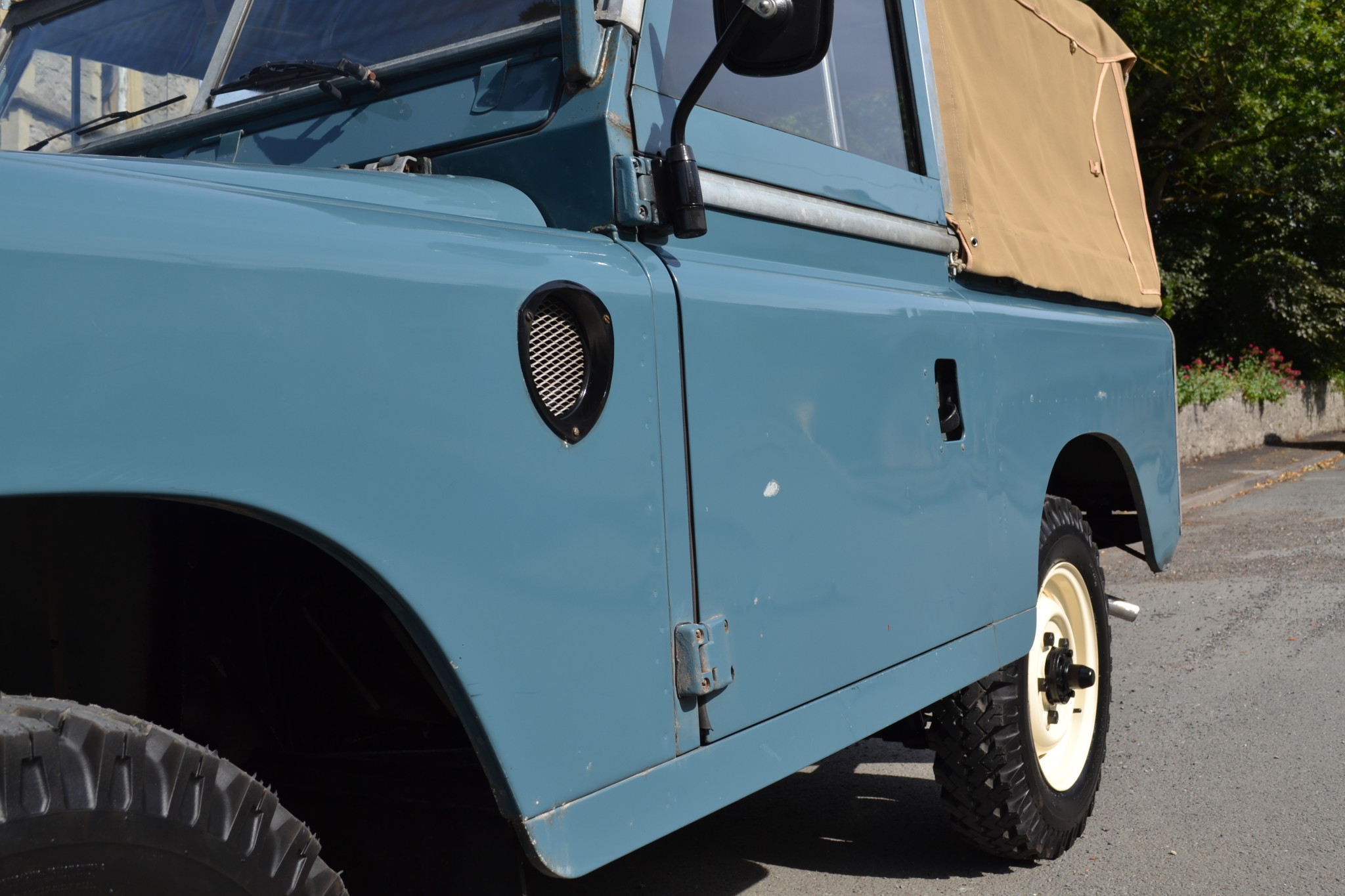 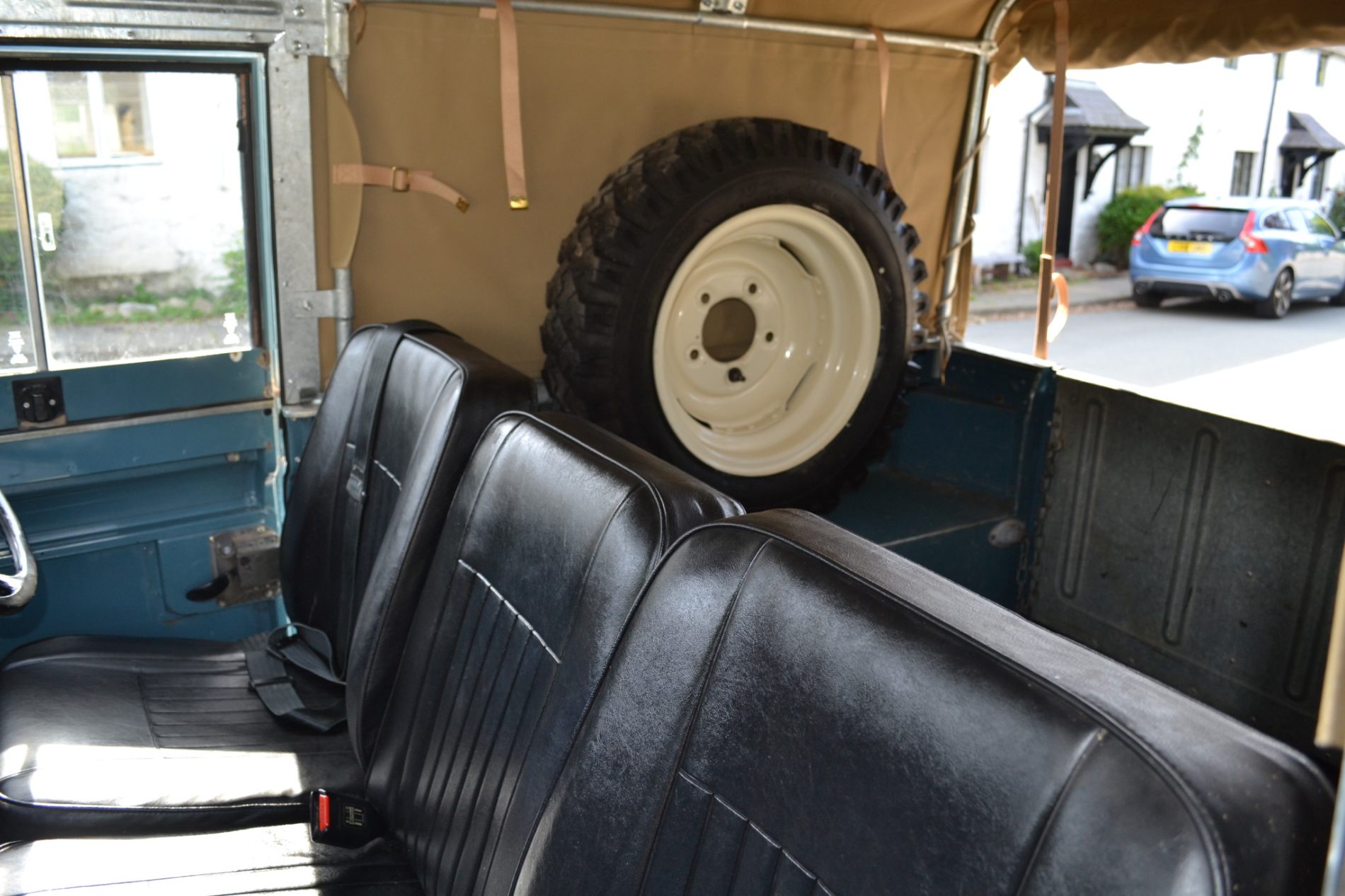 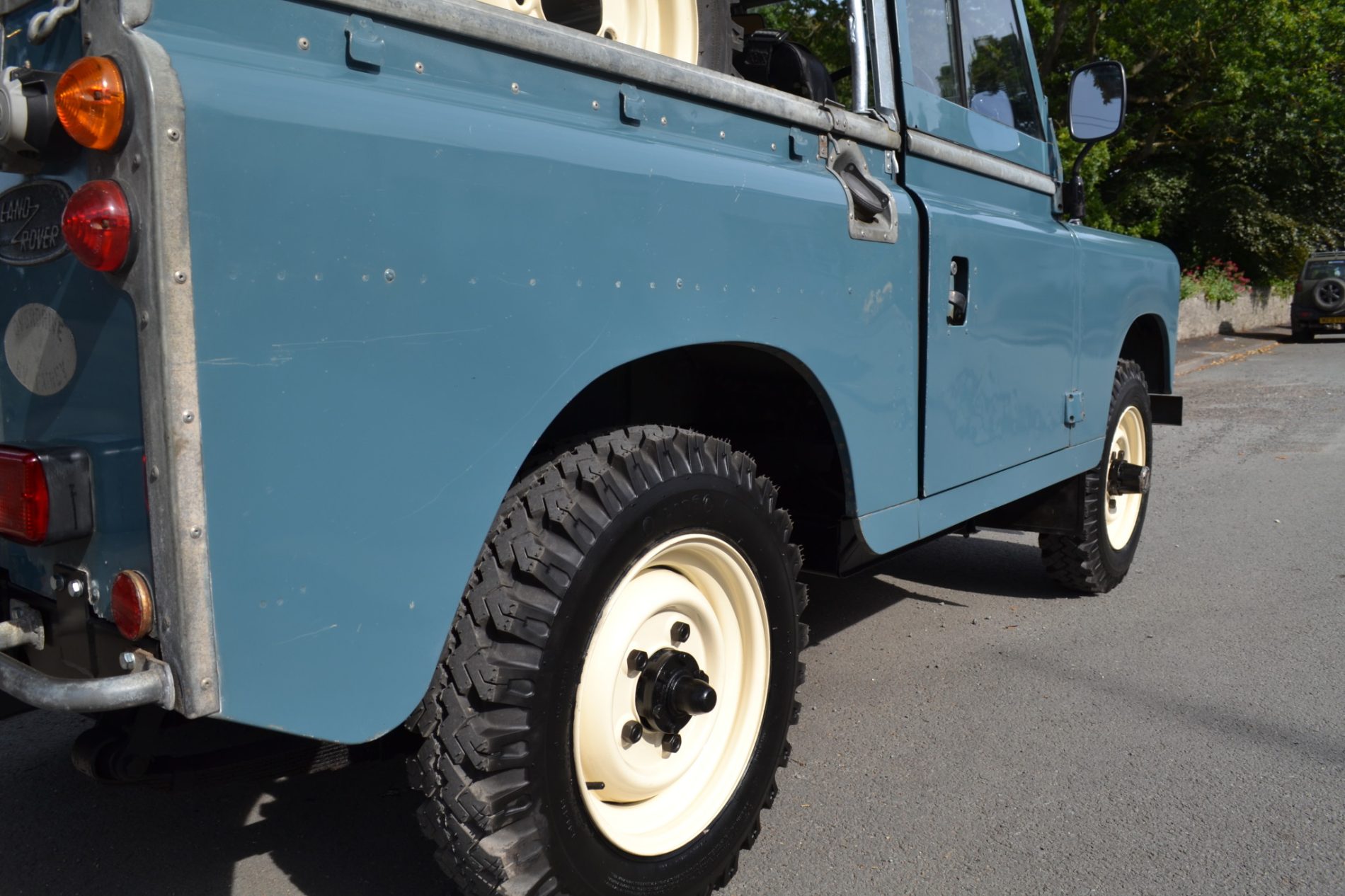 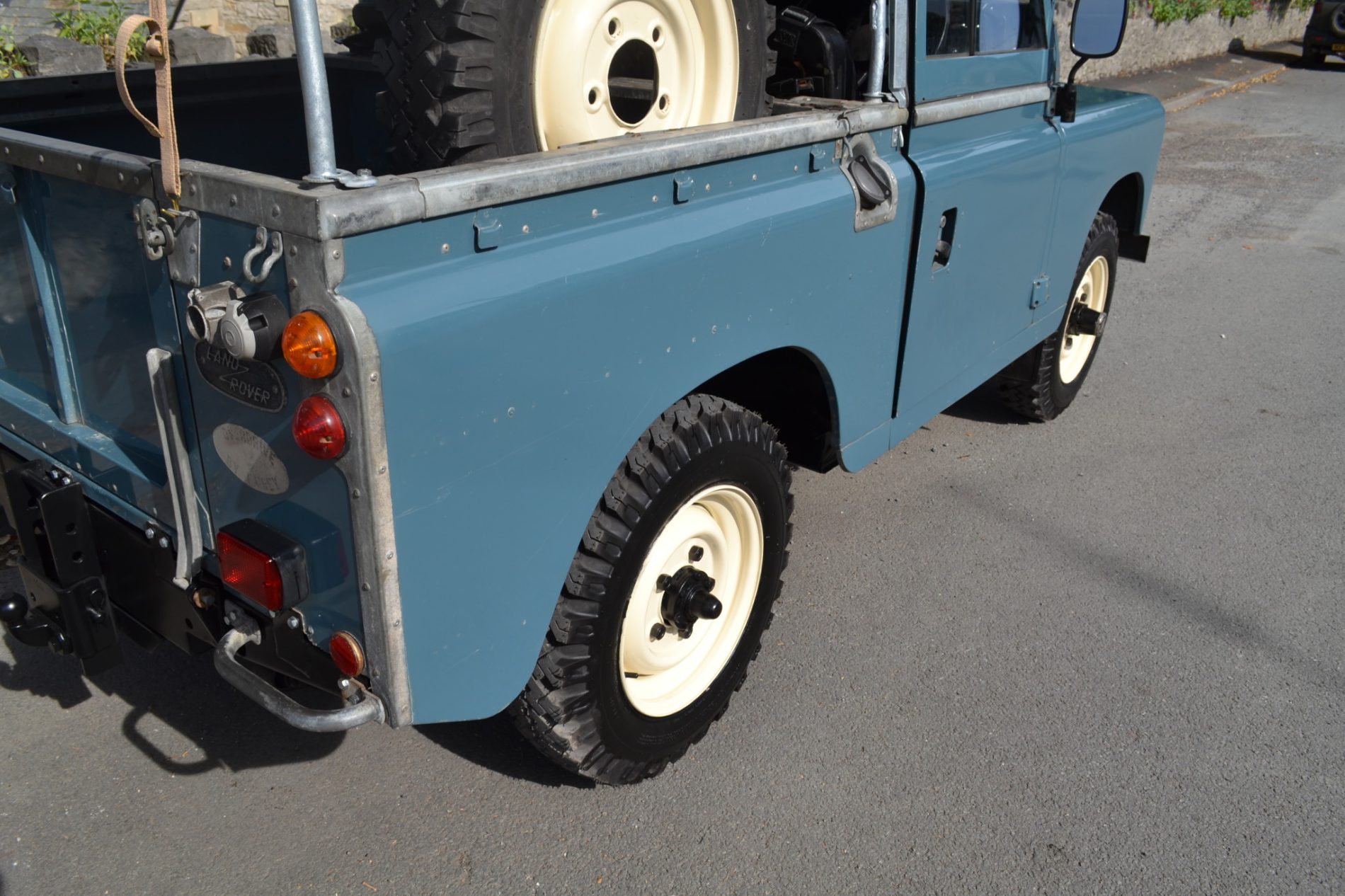 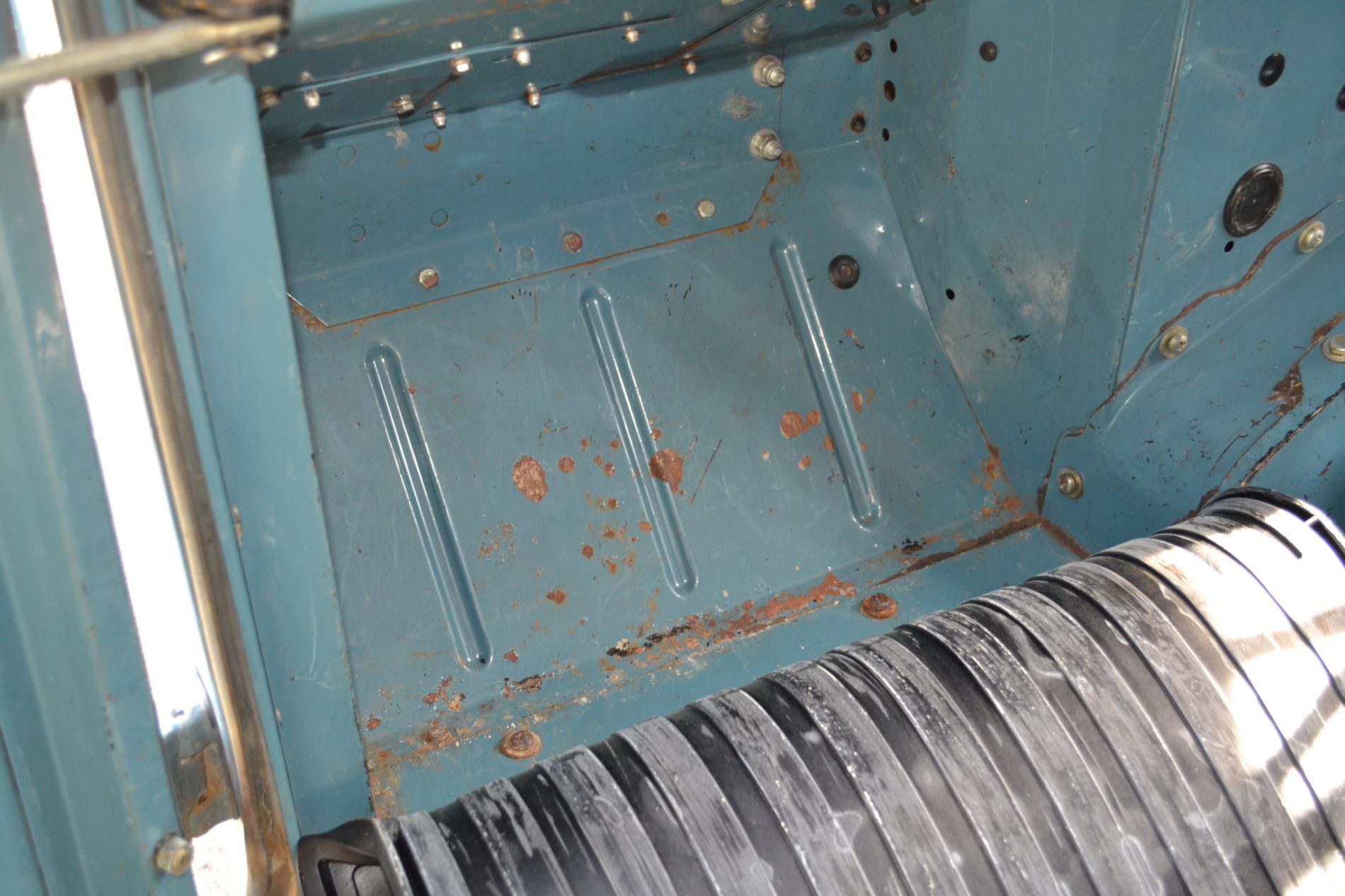 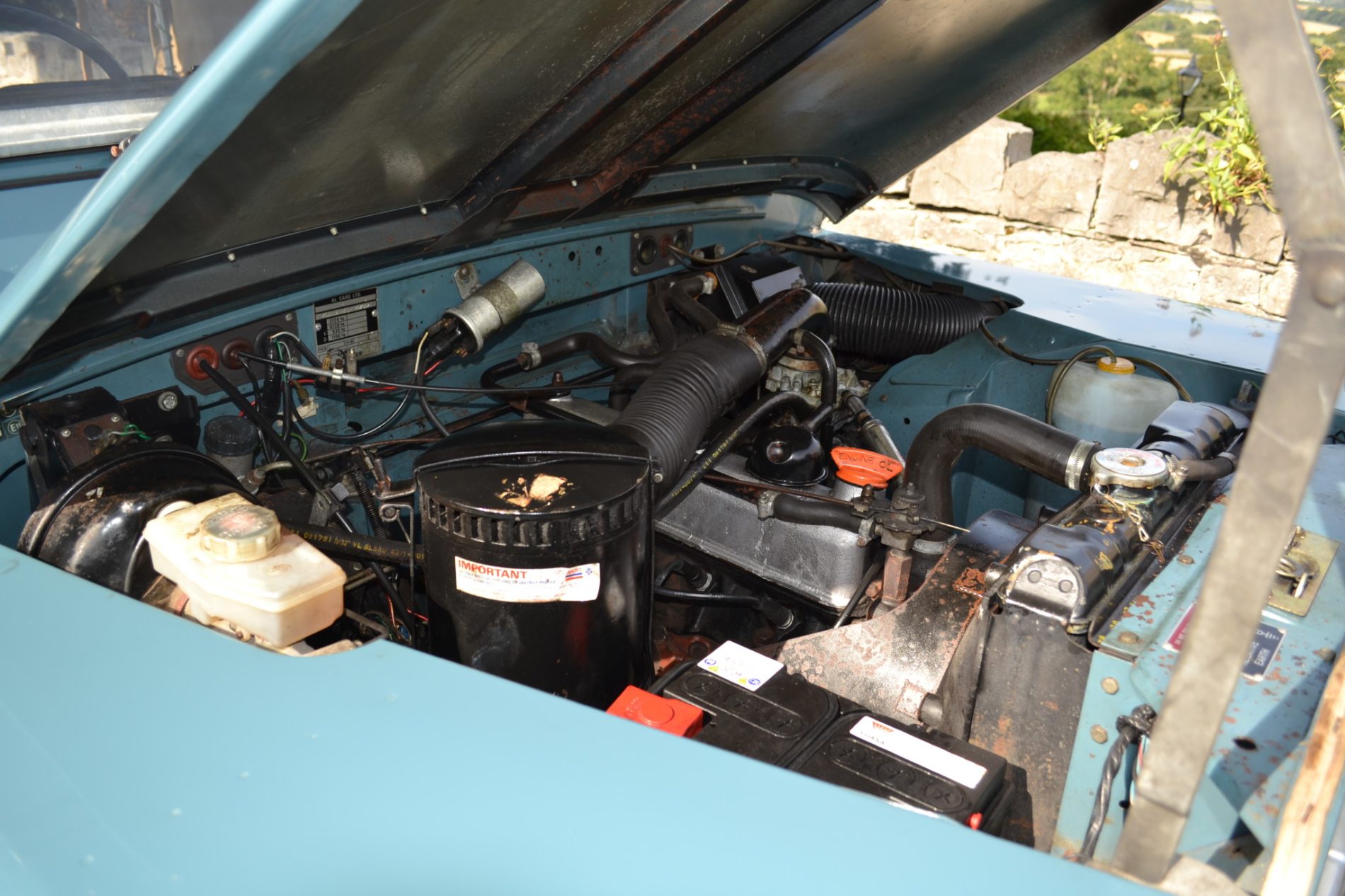 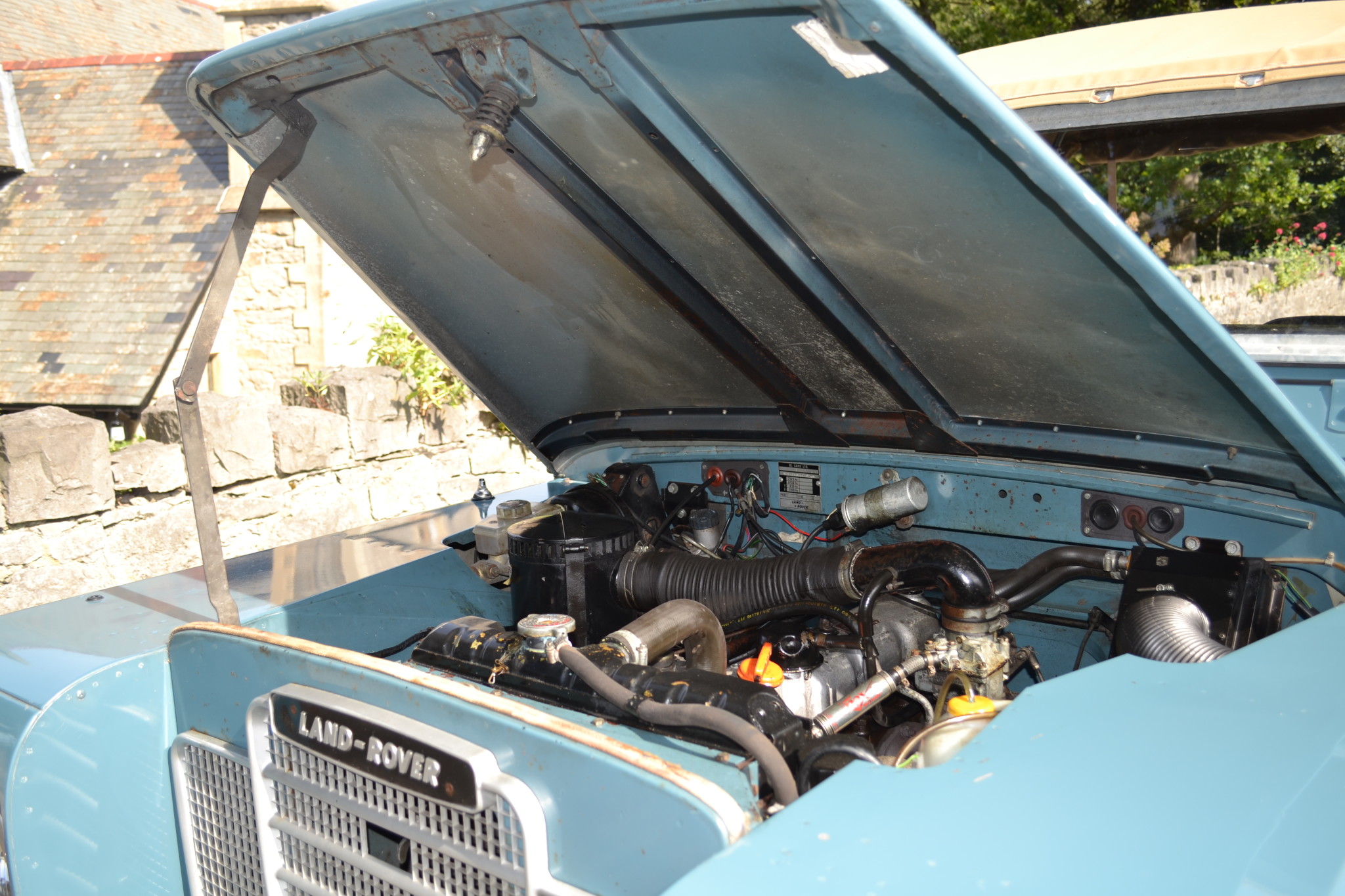 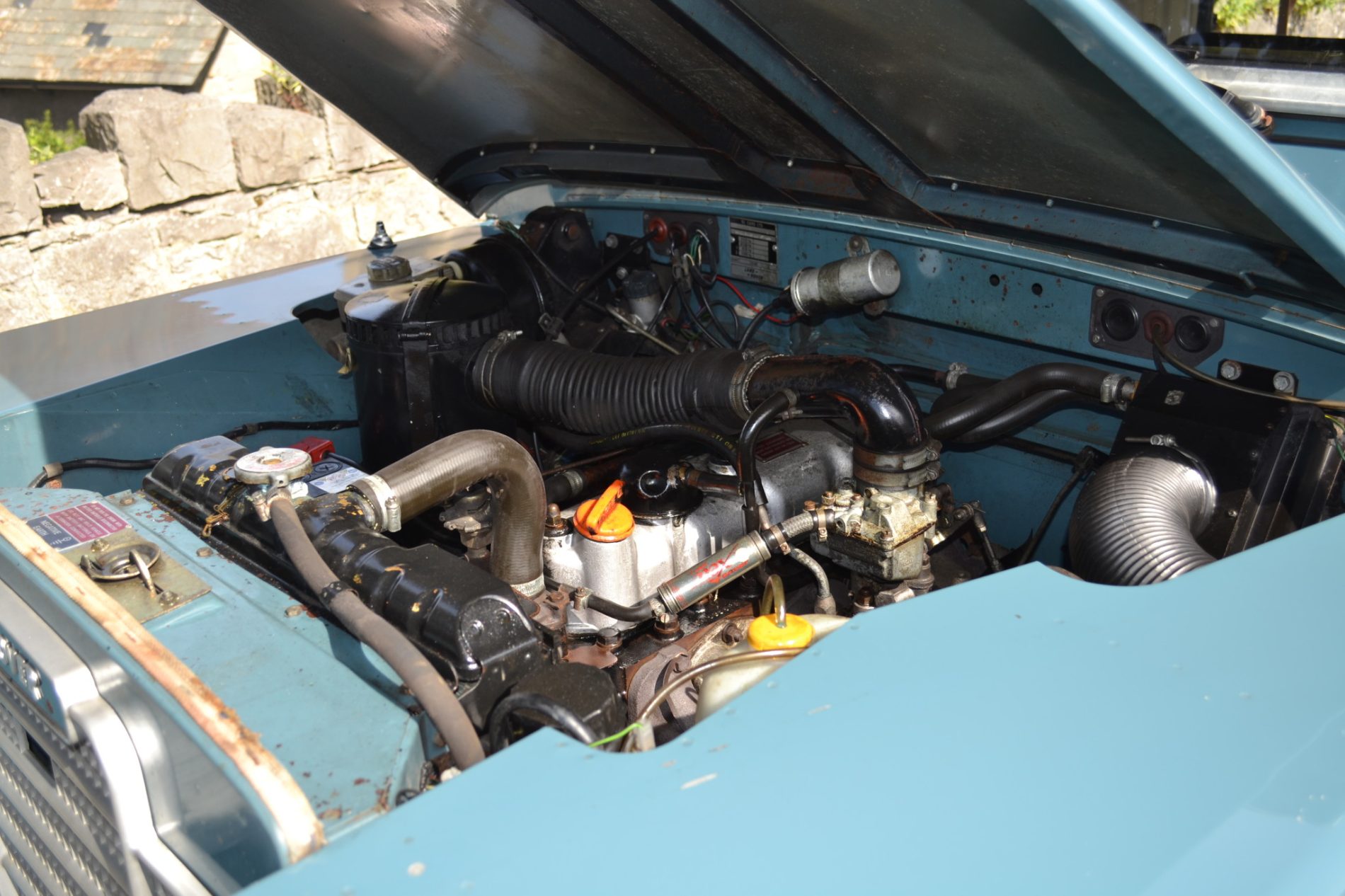 It has had just two owners from new, Mr. Williams brought the vehicle in 1982 and used it to tow his caravan hence the caravan socket on the back. It was then sold in 1989 to James Edwards in Chester which is still a Land Rover main agent today. The second owner then acquired the vehicle on the 19th July 1989 and used it locally around his Cheshire home and used the vehicle to go to the market once a week. The vehicle then came into our care, after been parked up since 2011 we have done some light recommissioning to the vehicle.

Unique in such original condition and we think this is one of the lowest mileage best original un-restored 1982 examples available.

When we acquired CJC 753X with the exception of a light damage to the nearside front wing and a few very minor scratches there was no damage on the vehicle.

The wheels are finished in Limestone, which is factory correct for a 1982 Land Rover in Marine Blue.

The rivets on the rear panels were never finished in body colour when they left the factory this is how it remains on this vehicle.

The bulkhead is exceptionally solid and original, in fact as good as we have ever seen including both original footwells.

The underside has been steam cleaned and then waxoyled to preserve the original chassis. You can still see the factory overspray under the wings and rear body this is exactly how they left the factory. No welding is required anywhere on this vehicle and it is now ready to go.

The vehicle has benefited from a new sand canvas which is a great contrast against the Marine Blue.

Exemplary - by far the best original Land Rover Series III. The original factory fitted Deluxe front seat backs are in good condition as are the bases they have never been replaced and are the originals too the vehicle. There is a tear in the driver’s base but we would prefer to see the original seats than poor quality replacements fitted a genuine used base could probably be obtained if the customer would prefer.

The dash is unmarked with no cracks or sun damage there are no additional holes anywhere.

No signs of a radio ever fitted although there is an antenna in the wing, the rest of the dashboard has been left unmolested. The door tops are even the originals with Triplex glass something that is almost definitely replaced on all other Series 3 Land Rover.

The load area is clean however it does have scratches due to the type of use the vehicle has had there is no holes or corrosion under the mat.

One of the best original engine bays we have seen on a Series 3.

Original paint to engine block. It has the correct later 5 bearing crank engine which runs and drives perfectly with plenty of power and is has much more power than the previous engine. Factory fitted inner mud shields unusually still both in place and are intact.

A joy to drive and such fun, the vehicle will be supplied with a full 12-month MOT with no advisories. Four wheel drive and low range engage, as they should. The gears change up and down as they should it has a very quiet gearbox which is a good sign of its light use and good maintenance over the years. The Fairey Overdrive is fully functional and engages and disengages as it should as do the original freewheeling hubs which are genuine Land Rover and retain their original badges.

Almost all Series Land Rovers we have had drip a little oil, some quite a lot, CJC 753X is the exception though no drips of oil to speak of even after standing for days in the same place.

All the tyres are brand new 6.00x16 including the spare.

CJC 753X is an unmolested Series 3 Softop in immaculate original condition. All the numbers match - the chassis numbers on the plates are the same as on the log book registration document and that stamped on the chassis itself. The engine number also matches that recorded on the logbook.

This is one of the best low mileage, two owner and original untouched Series 3 we have ever had the opportunity to own with a very nice history.

This Land Rover has obviously been cared for and cherished by its owner and no expense spared on maintenance.

It is a very solid example that requires no work and is ready to use and enjoy.

It retains its original chassis, still displays the V.I.N clearly stamped on it by the factory on the nearside dumb iron which is visible.

If you are an investor you will already know the growing importance of original un-messed with condition for classic cars.

What you see is what you get. CJC 753X retains much of its original paint finish - albeit with a few aged dings, scratches and marks. Please therefore do not expect absolutely pristine. However, you will have to go a long way to find a better vehicle.


Opportunities to purchase a genuine two owner vehicle don't often come up so please don't miss this one.