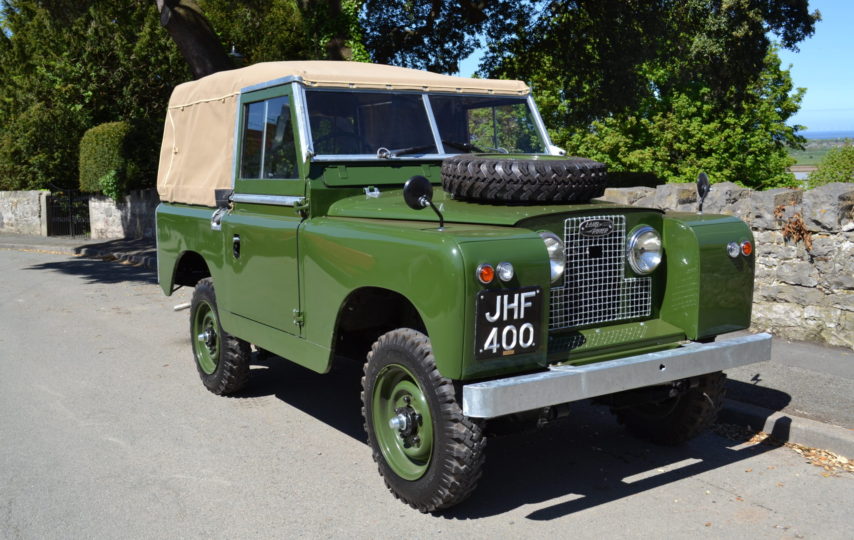 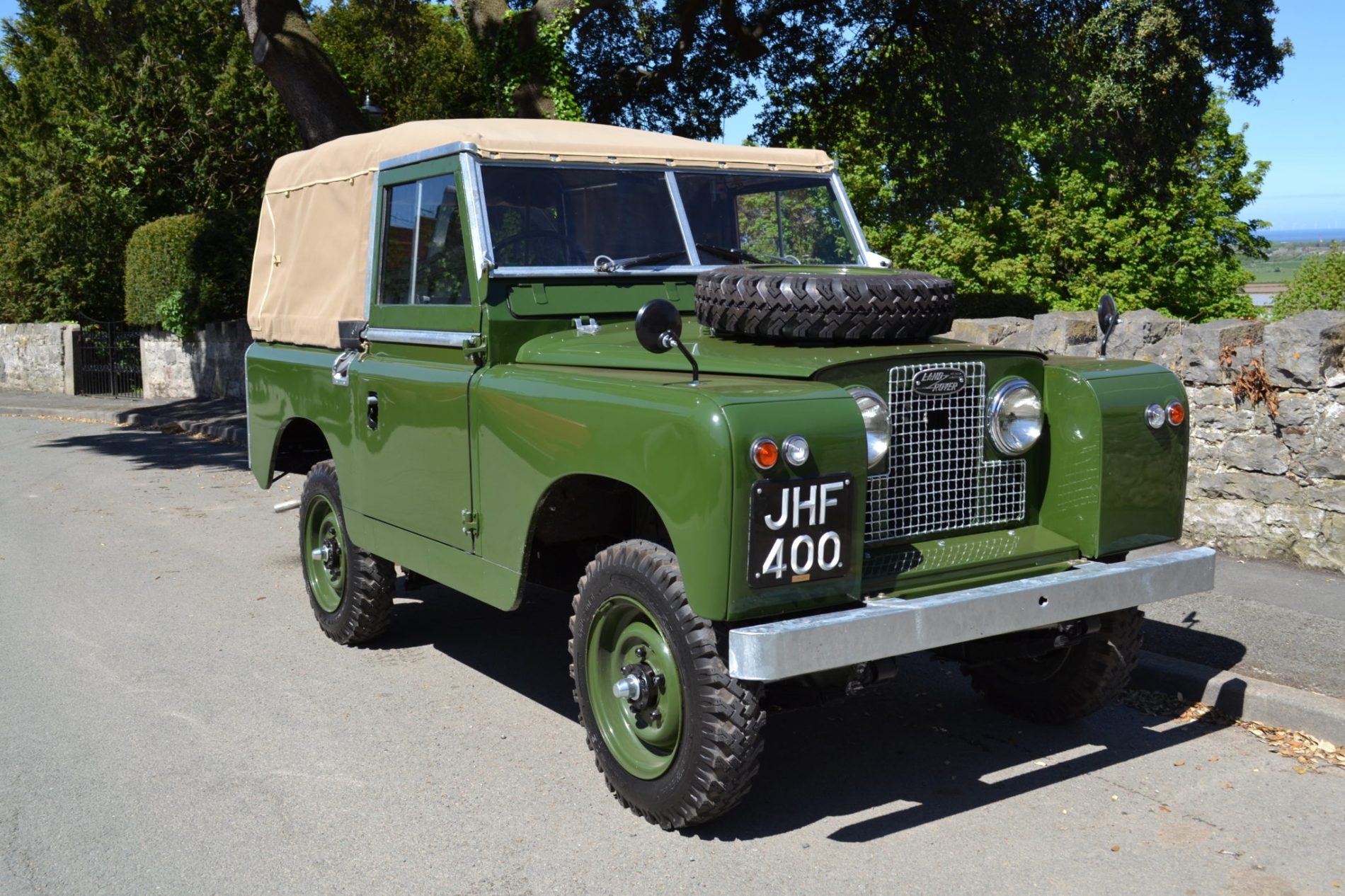 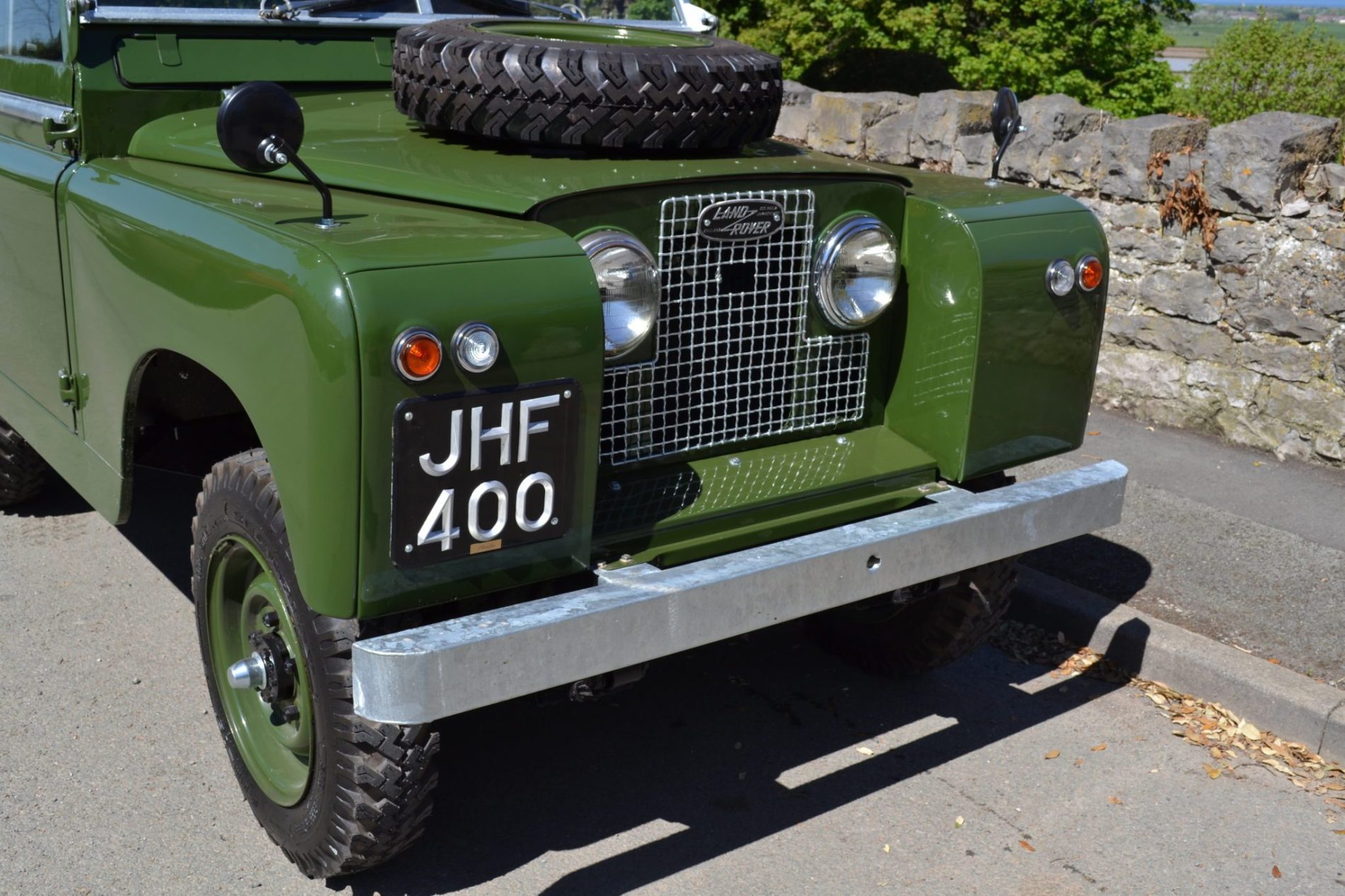 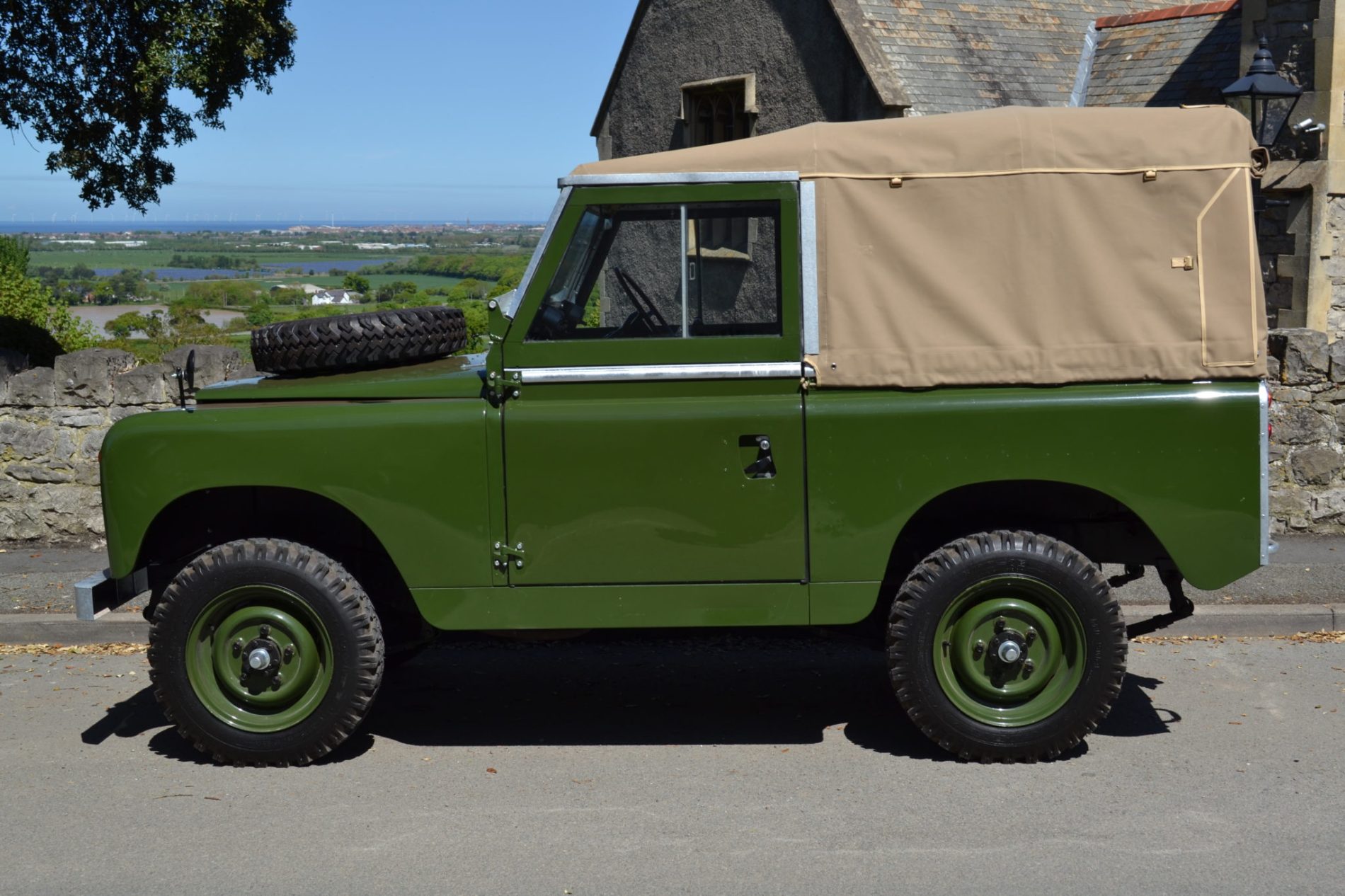 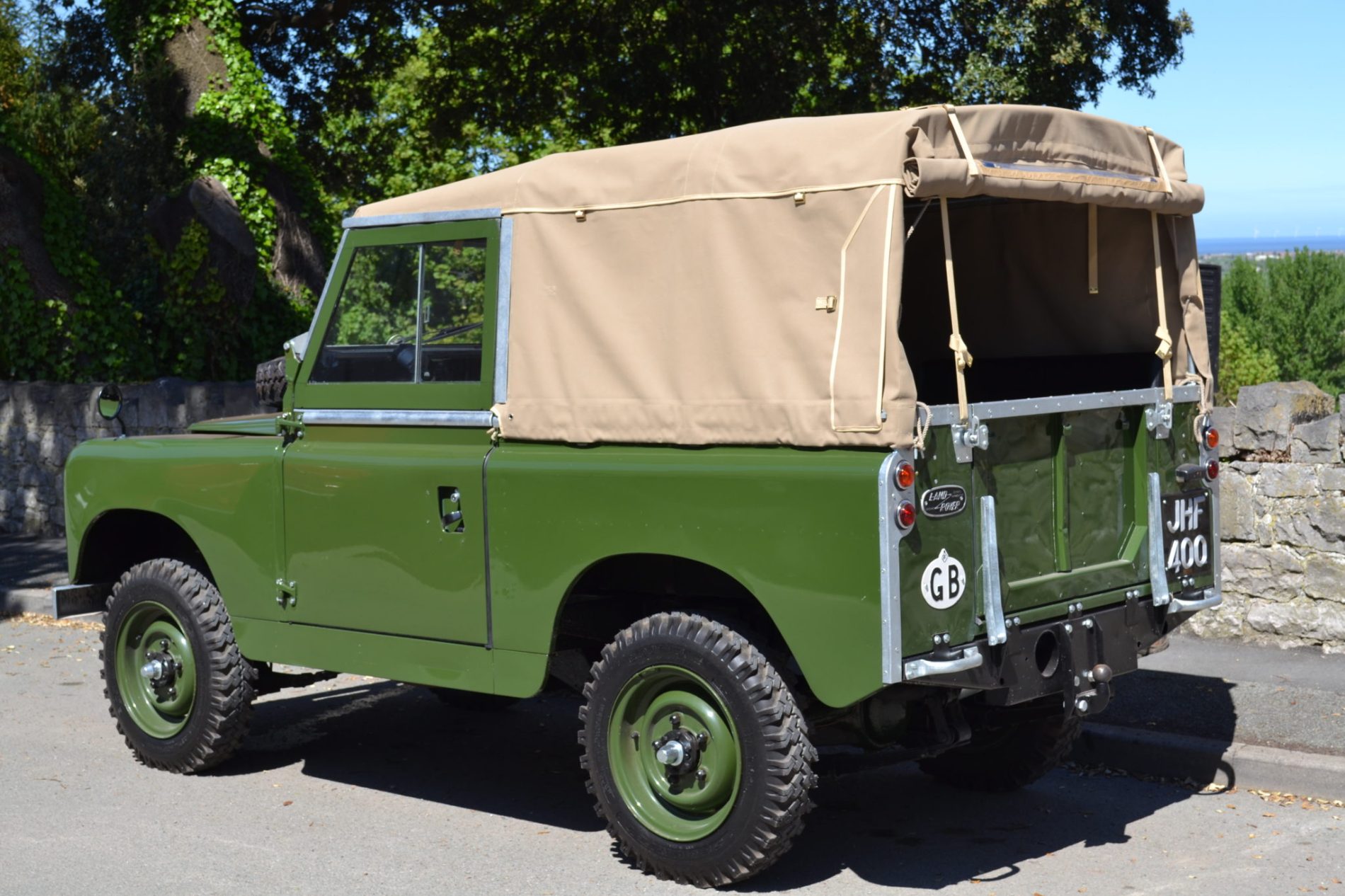 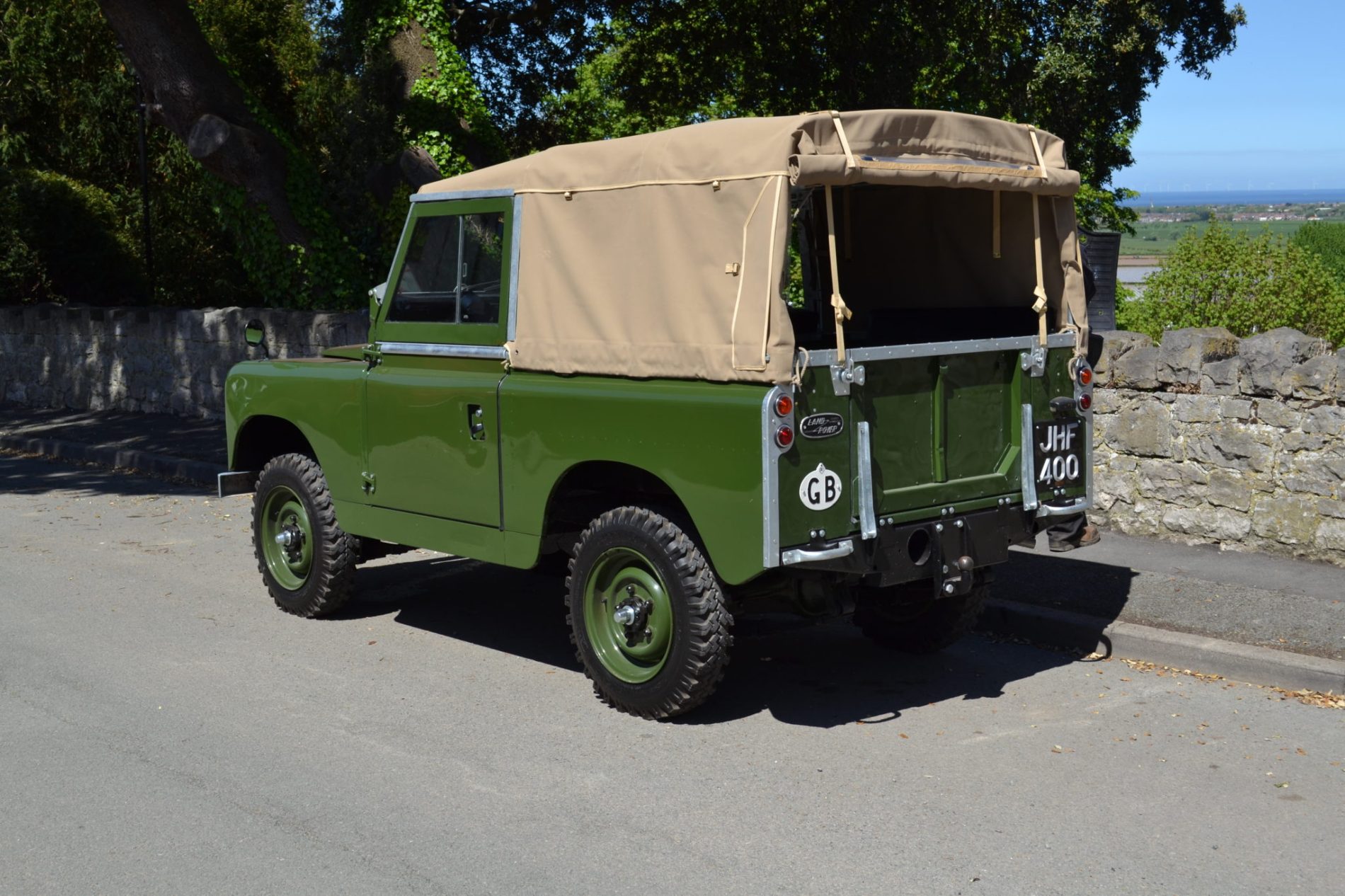 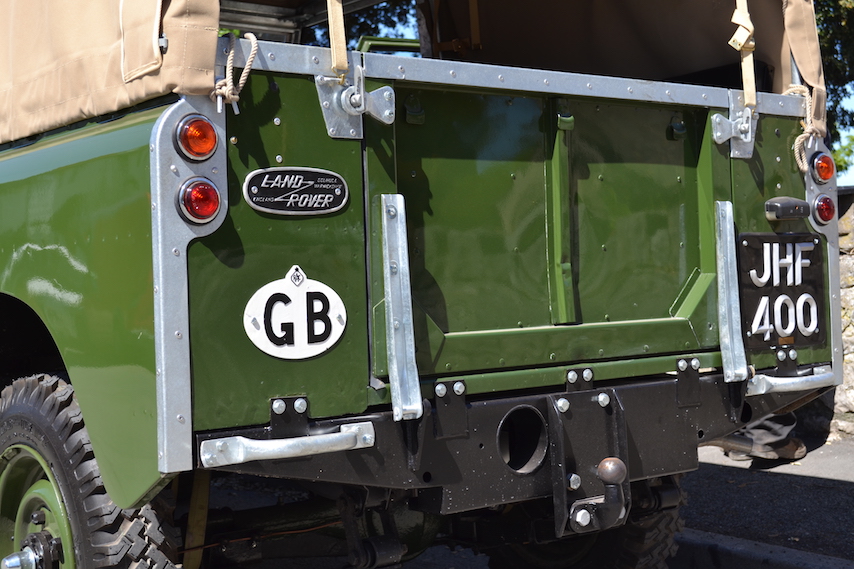 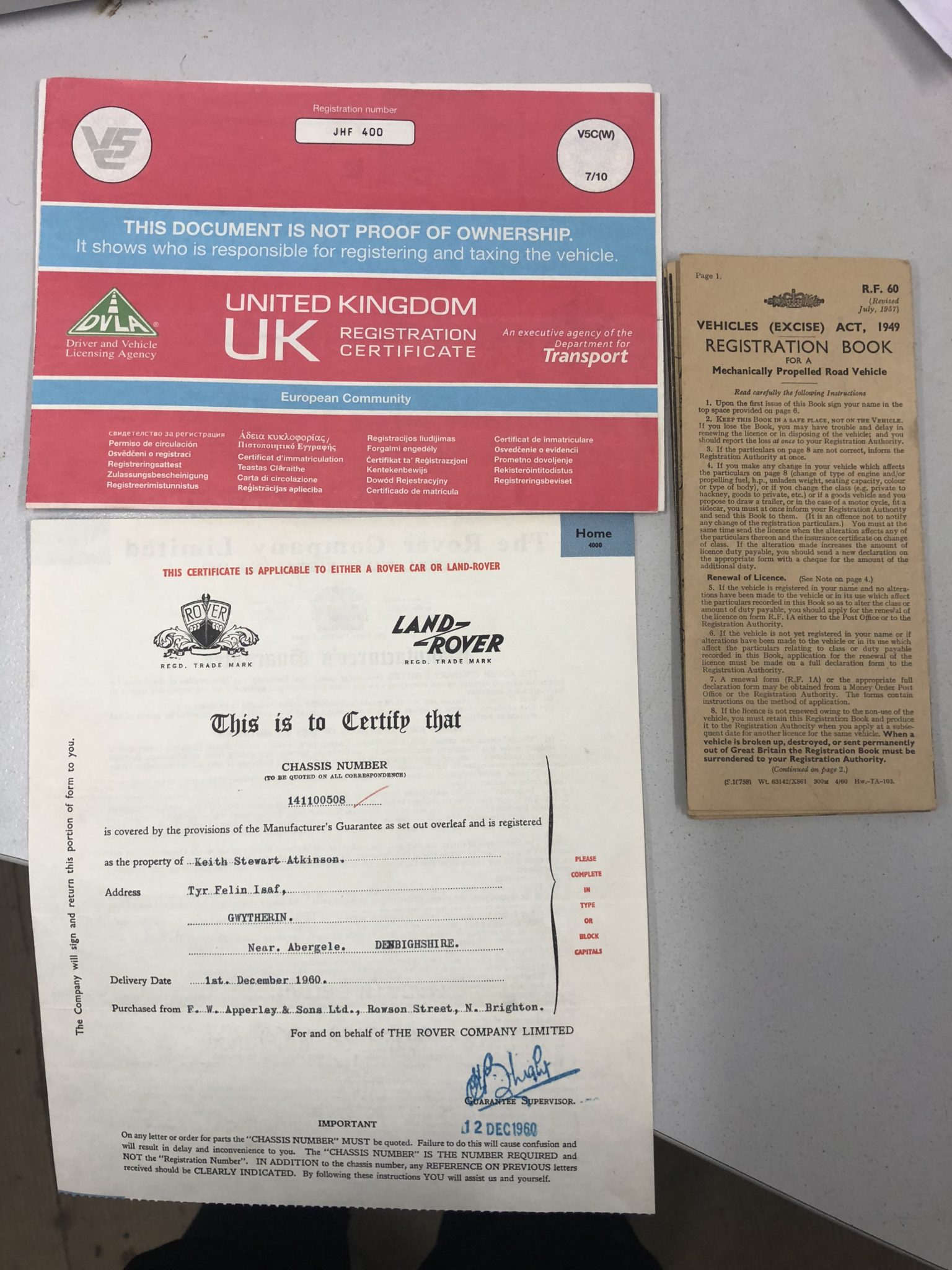 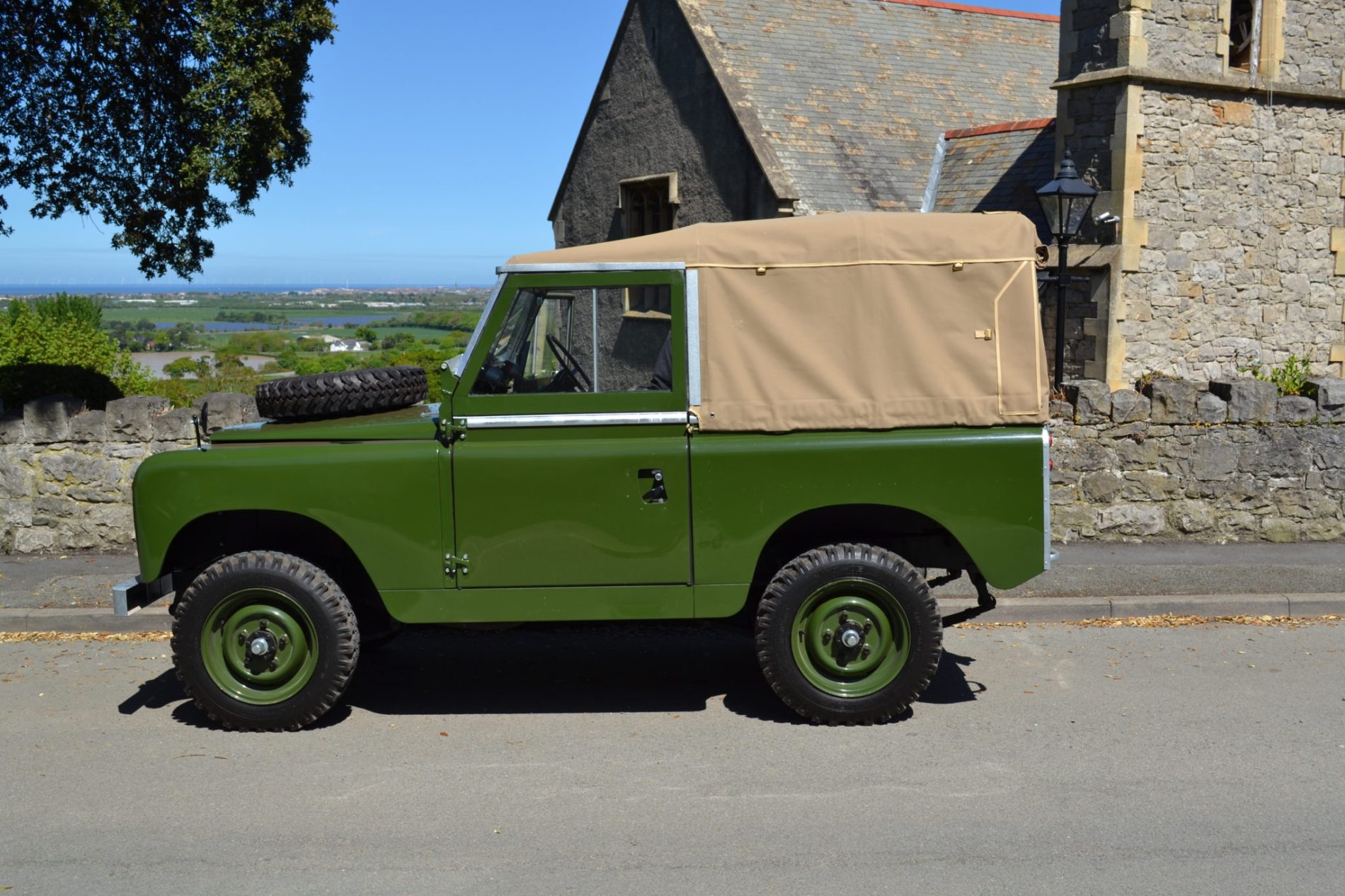 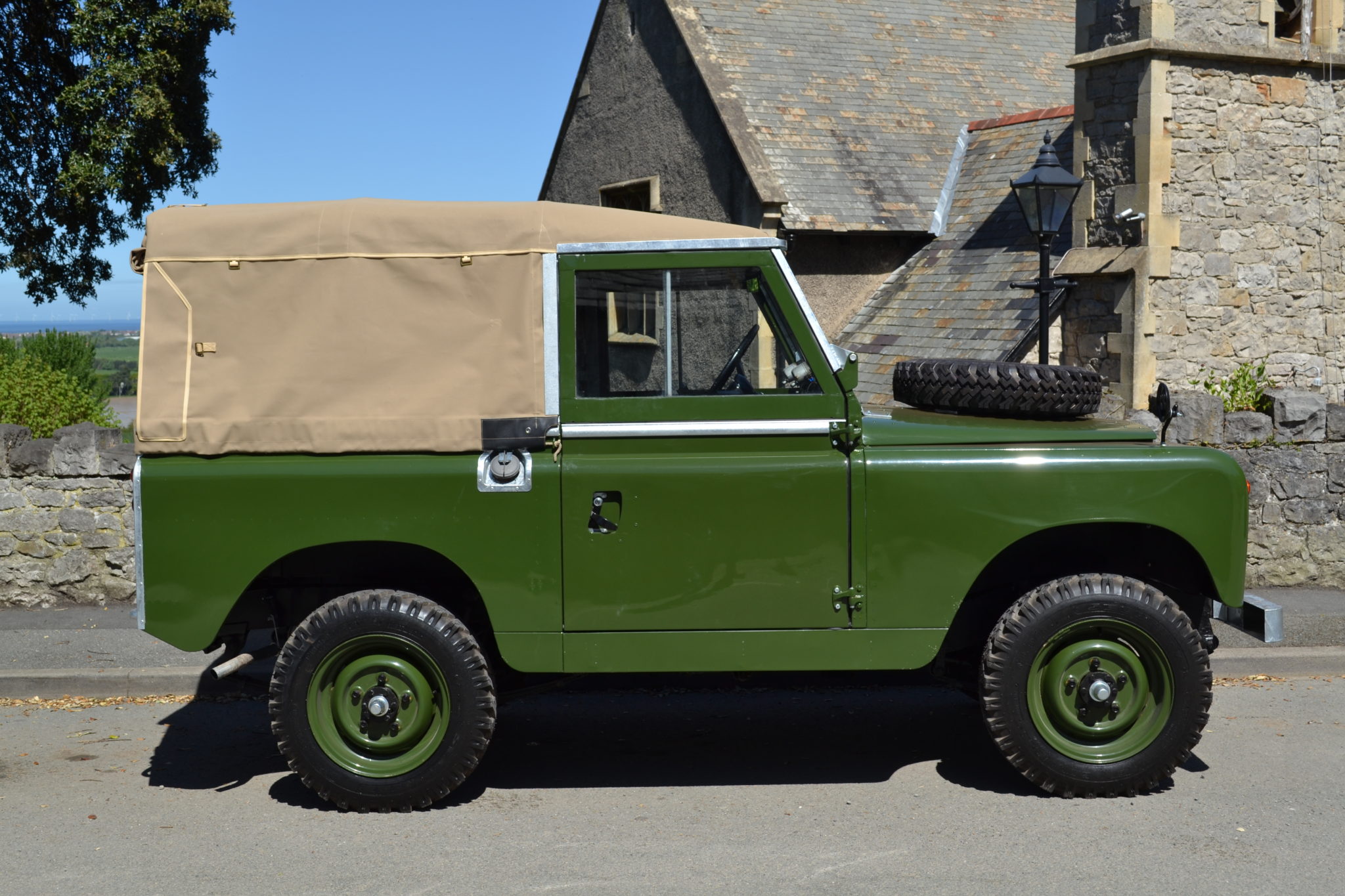 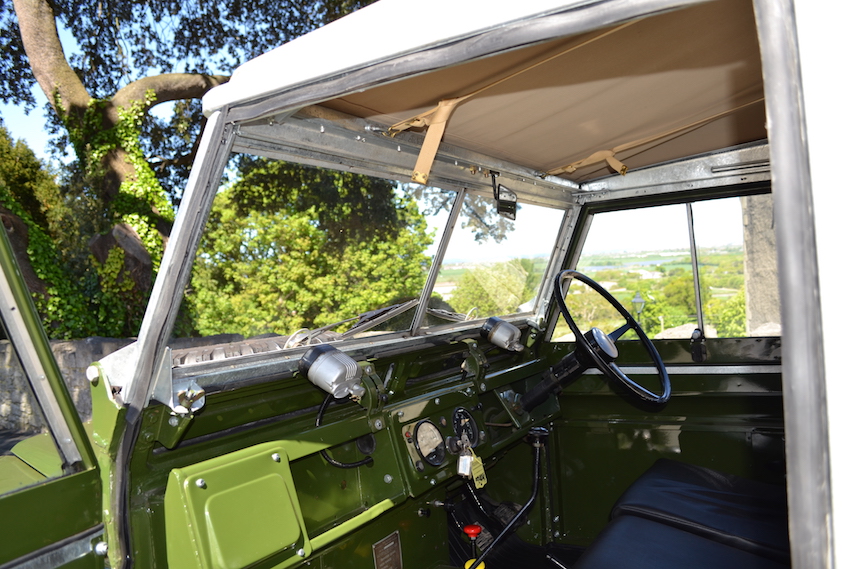 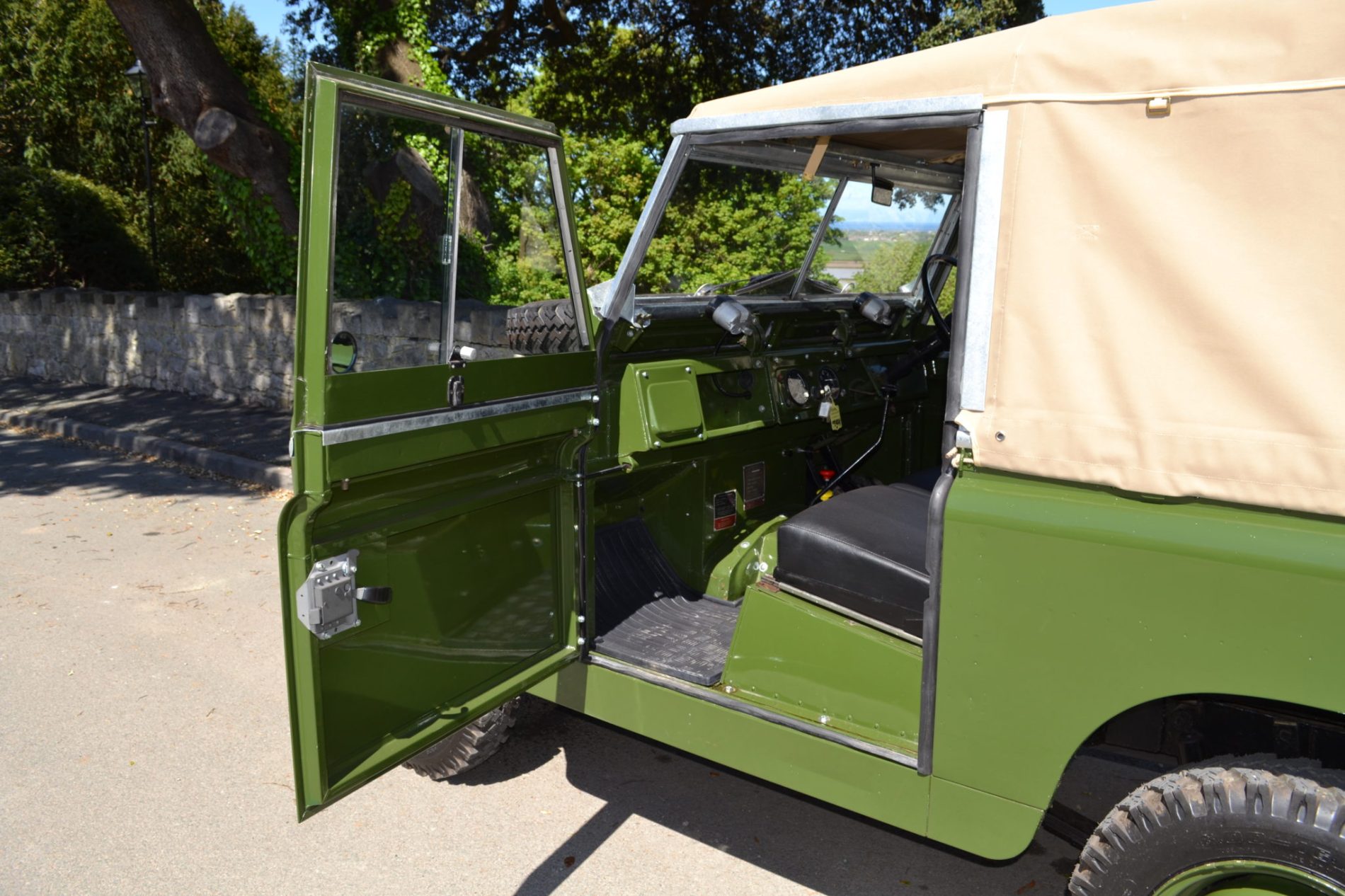 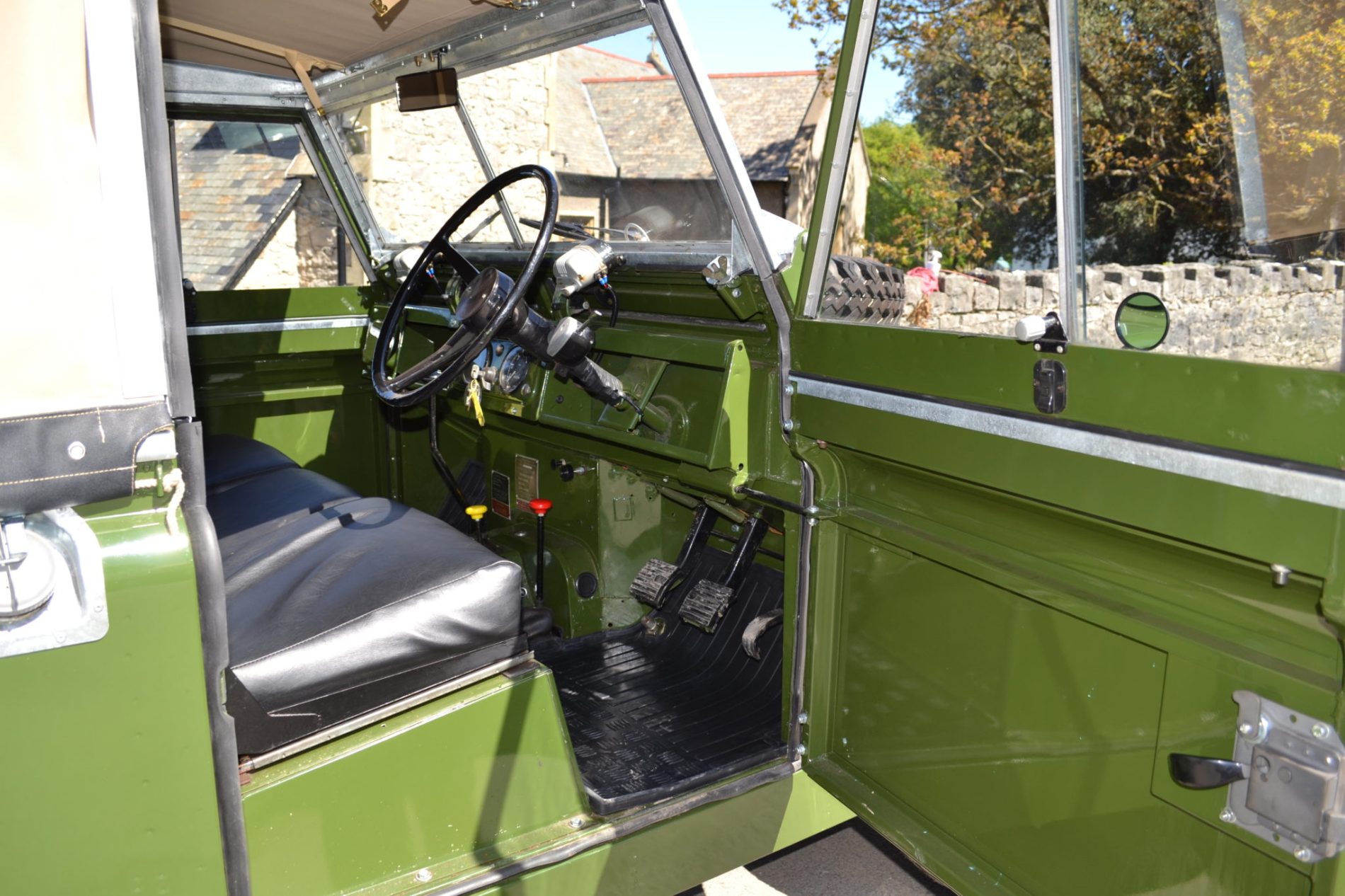 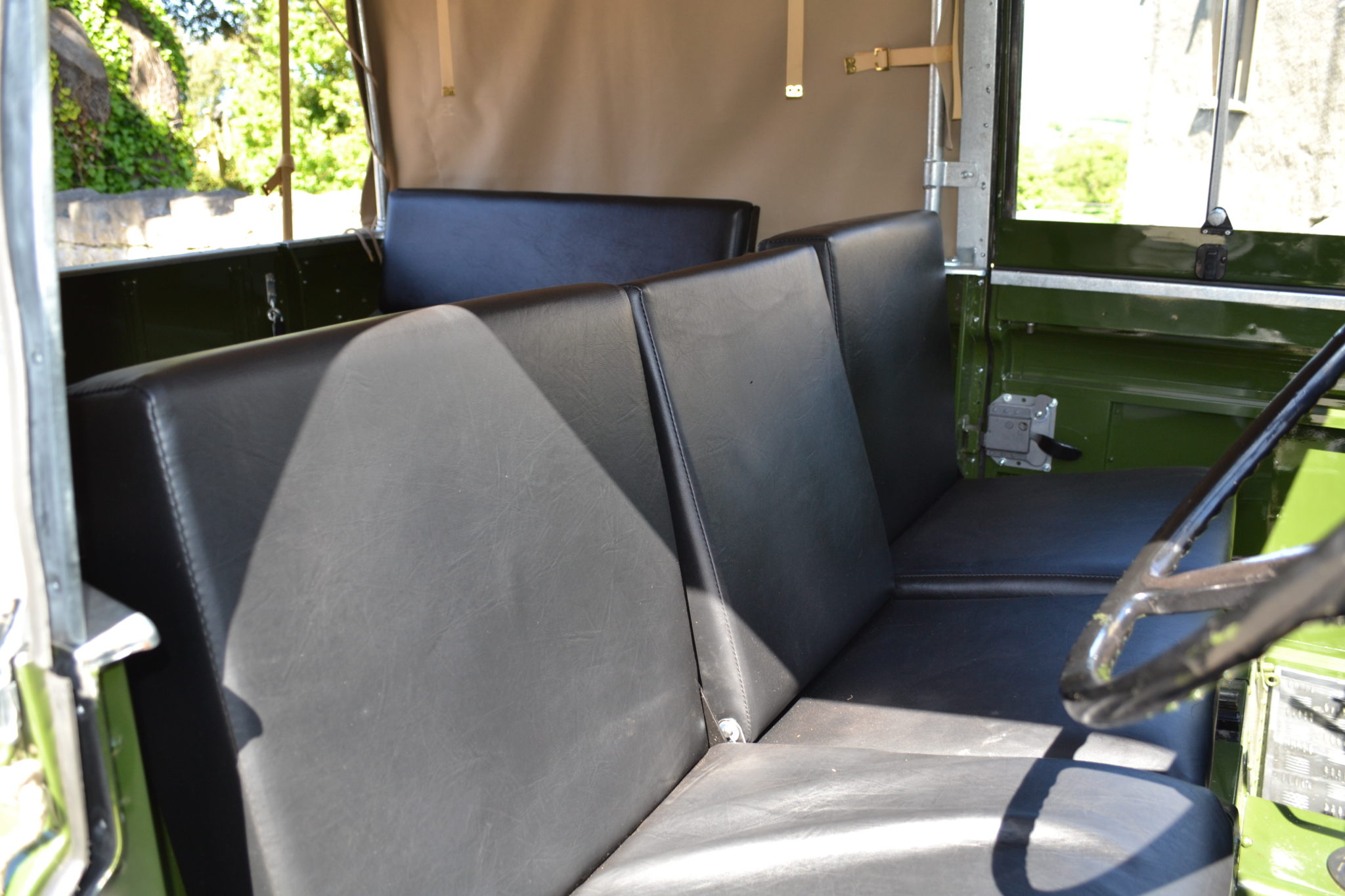 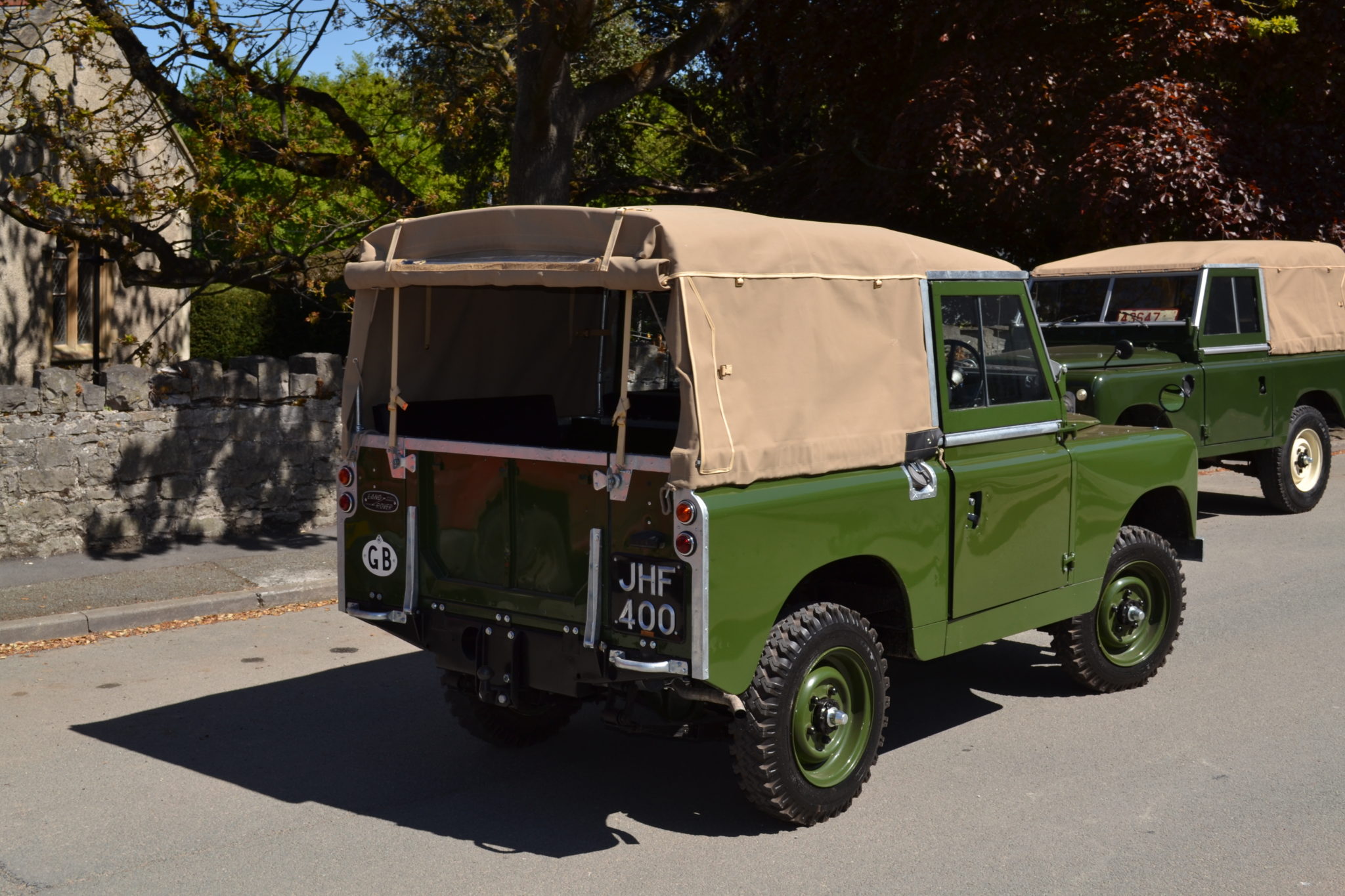 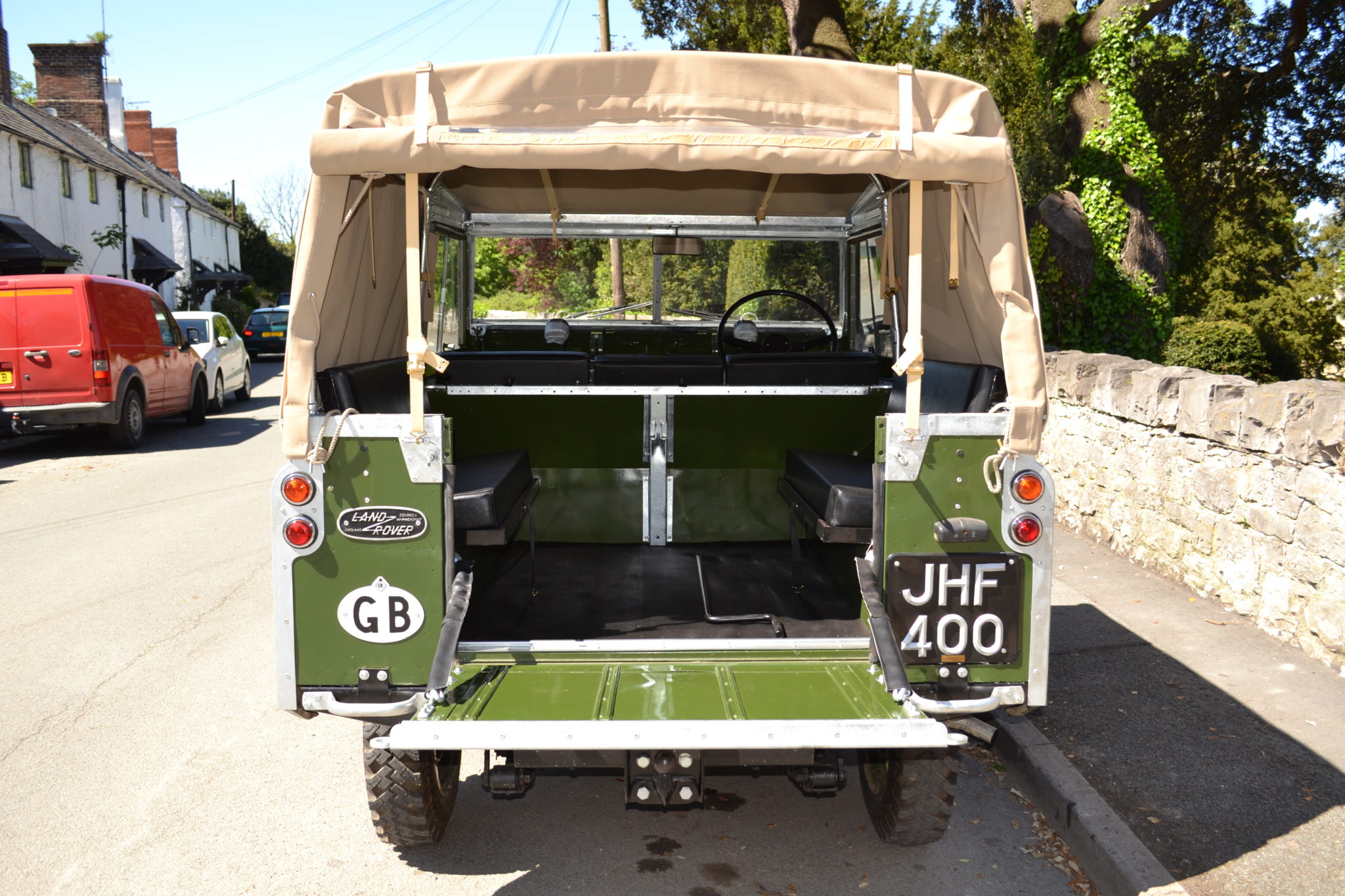 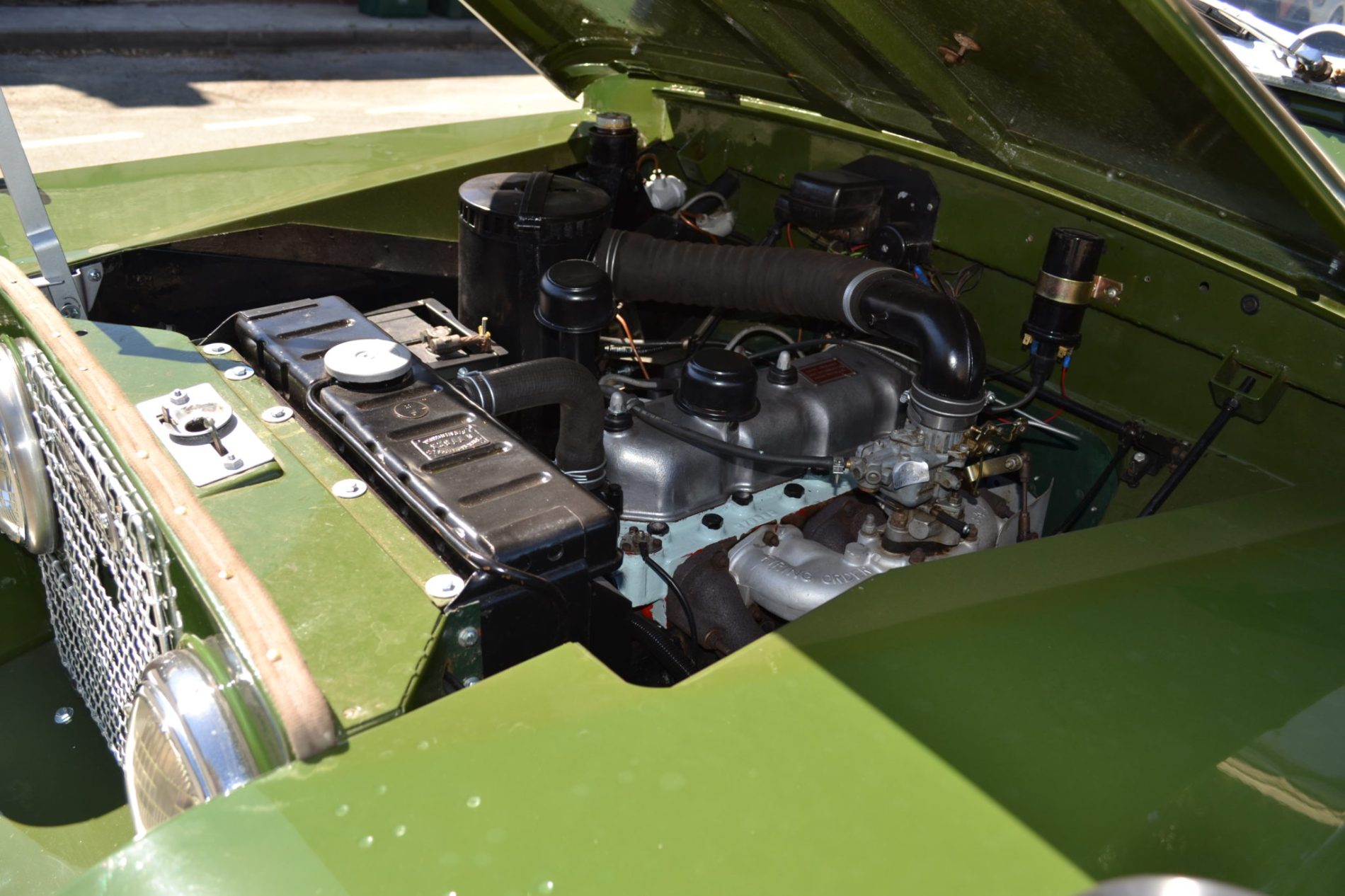 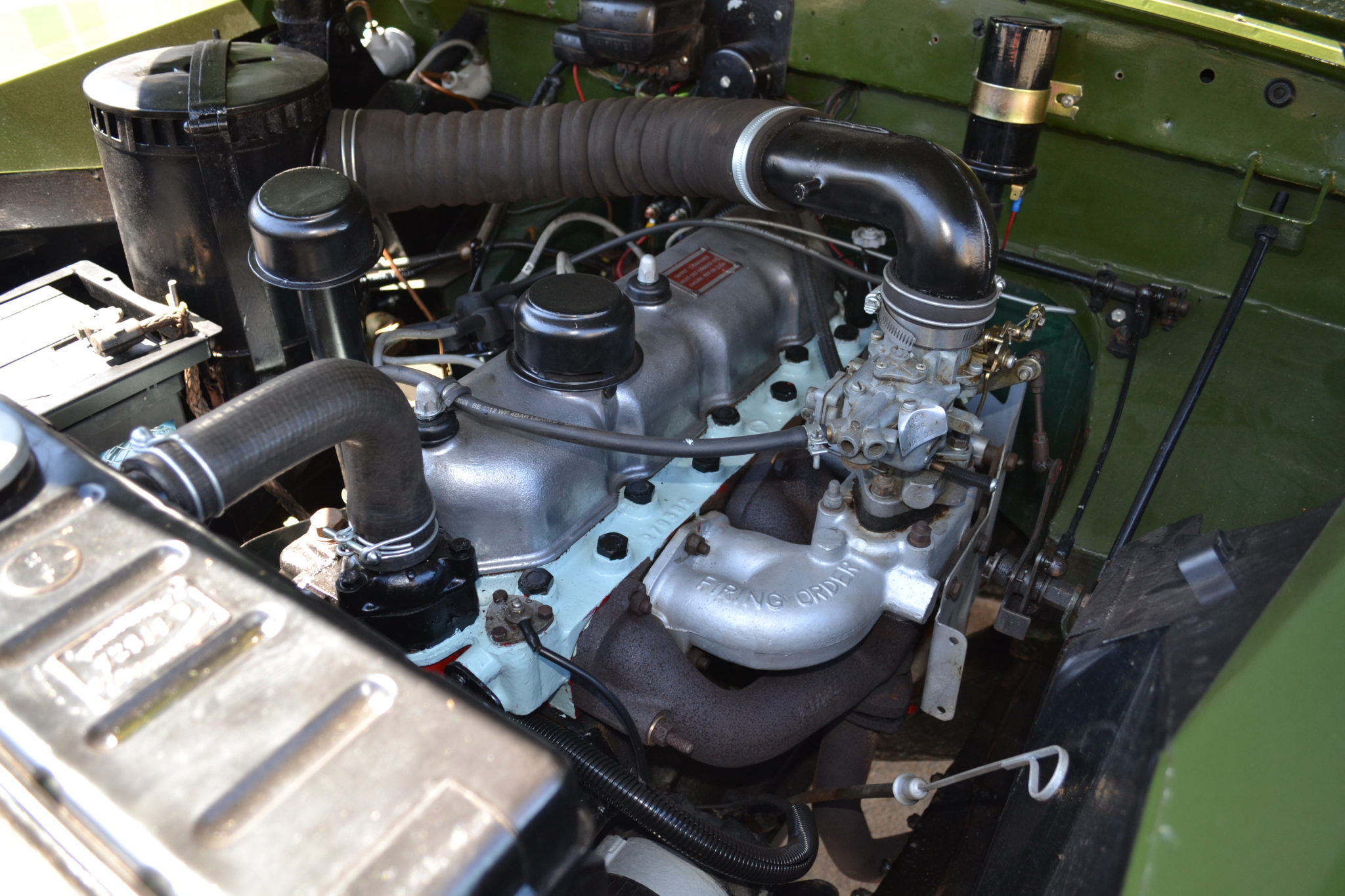 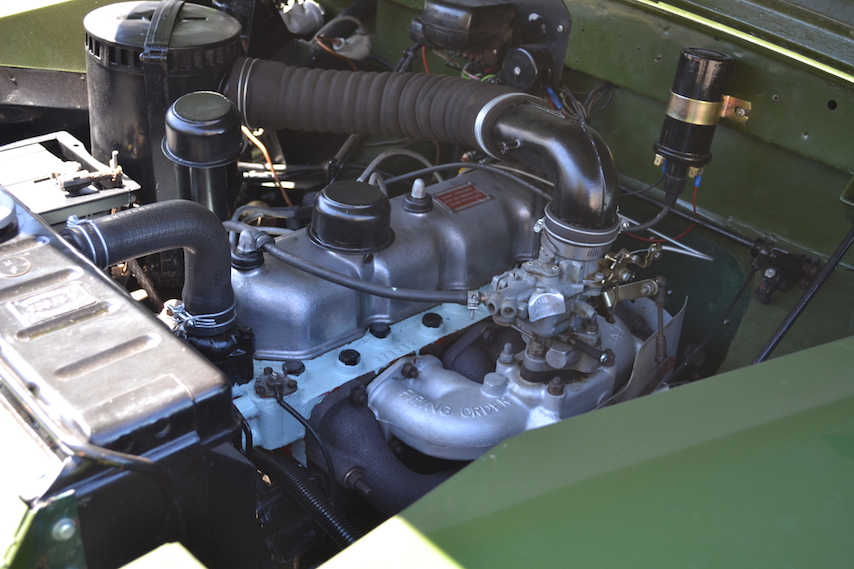 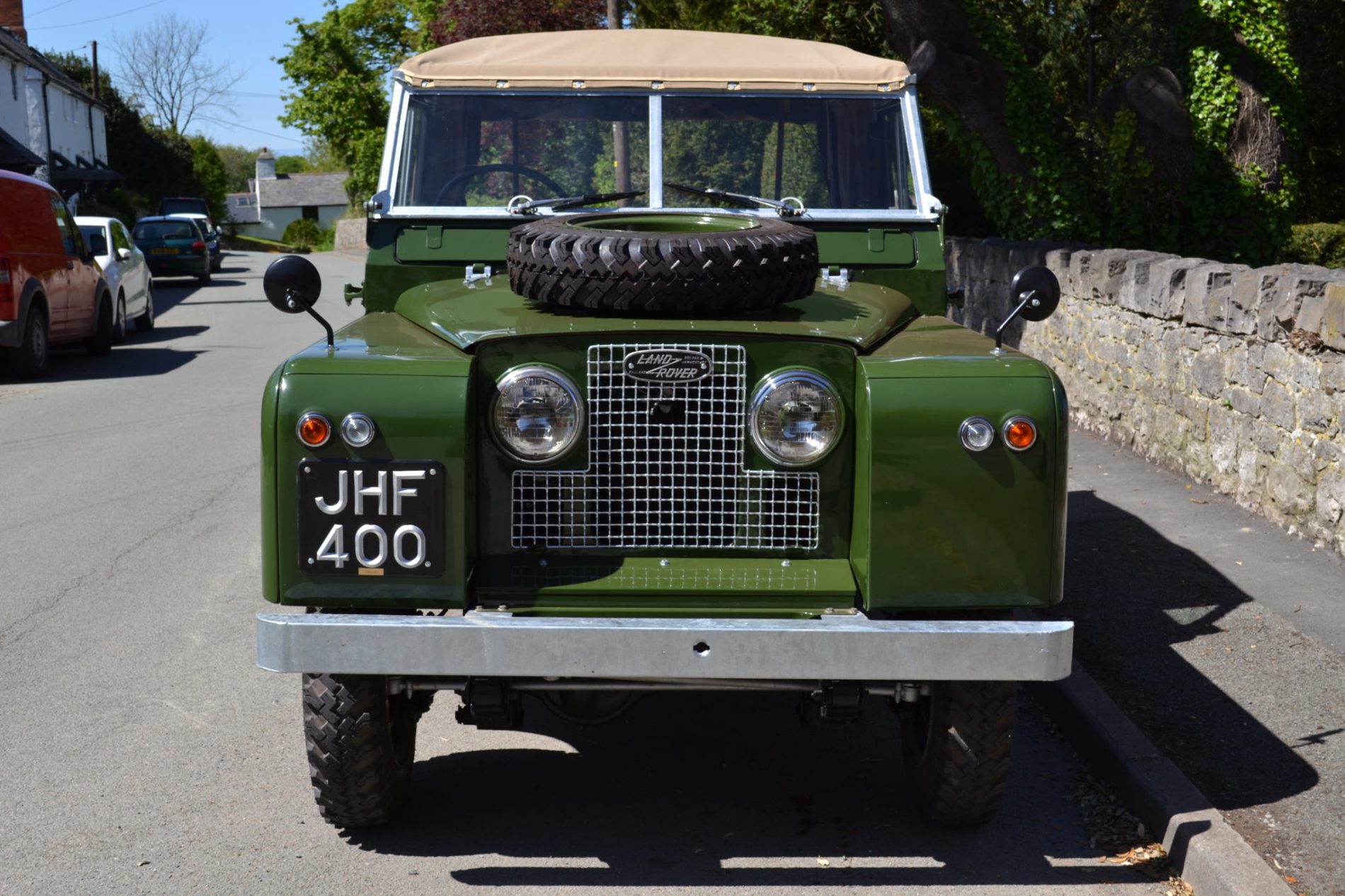 First supplied new by F.W. Apperley & Sons Ltd, Rowson Street, N . Brighton to Mr. Atkinson of Gwytherin, Near Abergele, North Wales. The vehicle is complete with 1960 paperwork from the Rover Company when the vehicle was delivered on 1st December 1960. Also compete is the original buff logbook in excellent condition and new V5C document. First Registered on 3rd December 1960 and allocated JHF 400 which is still retained with the vehicle today.

The vehicle changed hands in 2011 so the first owner had the vehicle for a staggering 51 years, Mr Hughes then started to rebuild the vehicle. Therefore this is a genuine 2 owner vehicle which is very hard to come across especially with all the paperwork. The vehicle has spent all it's life in Conwy County, North Wales.

The Land Rover is in one of the most classic colour combinations Bronze Green with matching body colour Wheels and a sand canvas, it looks fantastic and is correct to the vehicle and is as it would have left the factory 58 years ago. It has benefited from paintwork, strip down and re galvanising however this has been done to a very high standard and all the original spot welds are visible there is no filler on the vehicle, most unusual for a Series Land Rover of this age.

To find an unmolested example has become very hard, but to find one that has such a good history file, only covered fouty-two thousand miles, retains all of its original panels, its original chassis, engine, gearbox is becoming very hard.

The bodywork on JHF is very good and all the panels are straight with no dents or scraps. Which shows how careful the owners have been over the years, the history file shows pictures as the car was brought in 2011 and pictures of the restoration/recommissioning work.

The interior has benefited from replacement front seats and rear bench seats. There is also the starting handle behind the front seats.

During the restoration there was a couple of later modifications to improve the drivability including a later Series 2a steering box and wheel, however the original will be supplied with the vehicle.

The engine bay is extremely clean with original stickers still in place, the engine has been painted in the correct duck egg blue. The petrol engine fires up and drives very well there is no smoke, it idles sweetly and has plenty of power. The car will be supplied with the original Solex carb should anybody want to change it back. This is the early three bearing crank engine. The engine has been fully serviced by ourselves.

The factory fitted engine busts into life at the turn of the key. It is apparent that this is a vehicle that has been maintained and covered a low mileage it runs as quiet and smooth as any Series Land Rover that we have ever had.

A joy to drive and such fun, the vehicle will be supplied with a full 12 months mot although it is already now mot and tax exempt. Four wheel drive and low range engage, as they should. The gears change up and down as they should it has a very quiet gearbox which is a good sign of it's light use over the years. It will be supplied fully serviced including engine, oil filter, main gearbox, transfer box, overdrive, diffs and the swivels.

Almost all Series Land Rovers we have had drip a little oil, JHF 400 is an exception though no drips of oil to speak of even after standing for days in the same place. The steering is as it should be and the vehicle doesn't wonder on the road like some series vehicles do.

This is a very honest 58-year-old Series Land Rover. You will have to go a long way to find a better vehicle. Especially one that you can be the third owner of!!!